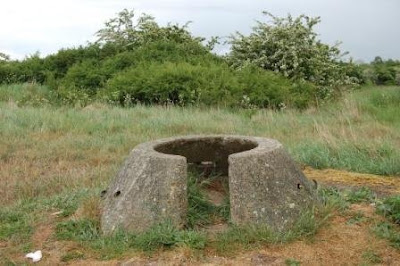 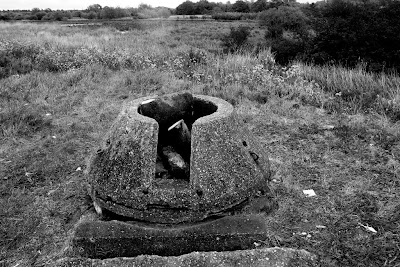 The subject for this week's entry for Photo Hunt is Important. So what's so important about a few bits of rotting concrete you may ask. The photos are of two of only nine (I think) remaining Tett turrets anywhere. Four of them (again I think) can be found in a local country park which was the site of RAF Hornchurch, a famous Battle of Britain fighter station.

The Tett turret was one of those hasty and desperate measures devised to protect Britain when there was a genuine (or at least a perceived genuine) threat of German invasion. It was big enough for just one man and a light machine gun. The illustration below gives an idea what it would have been like inside one.

So why this choice of subject? Even if it looks unimpressive, the preservation of our past IS important..... 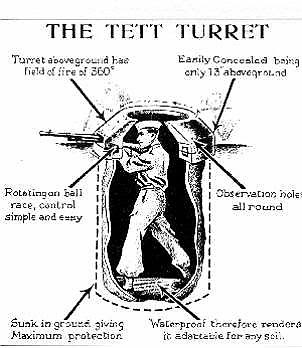 Those are important pieces of history. Happy hunting.

Good post. Great take on the theme. Have a great weekend.

Oh wow - great information on something that I did not know about.

Oh cool, this is neat. I didn't know about this... always interesting to learn about stuff like this!!!
Rocky Mountain Retreat

Cool sharing on the preservation of historic remains. I did see quite a few remains of mini concrete fortress over here, even in the midst of modernization. Great take Jams. :)

Great interpretation of this week's theme. Thanks for the history lesson - I'd never heard of Tett's turrets before. Have a lovely weekend!

I agree that preservation of our past is important. The photographs are quite beautiful. I like both of them but I think the black and white is my favorite. Interesting seeing one of the turrets in color and one in black and white. I hope you have a great weekend.

Jams... I love this entry. I'm a history girl and totally agree with you... preserving it is very important. Nice shots!

Great post. And, yes, I was wondering what was important about rotting concrete ... until I read the post! :)

nice shot. at first, i dont have any single idea what it was but after reading the description, i understood it. it is very interesting

Oh gosh, I wouldn't have wanted to be in there. We have a lot of people to be grateful to for our freedom. A very important part of our past.

This is such an interesting post. I have not heard of these before. Sara from farmingfriends

Important on many levels! I love the history lesson, too. Fascinating...

Wow, that is very interesting. I couldn't imagine having to be in one of those. What it must have been like for those soldiers. It is so important to remember the past. Great post.

so interesting! i think i've only seen something like that in one of my son's video games!! :)
Happy weekend!

wow! how nice your picture is,indeed that really important! kepp it up...

I'm slightly claustrophobic so no way would I have been in one of those. What an interesting idea it was and I wonder how it would have worked if indeed Britain had been invaded.
Have a good weekend Jams.

Great entrty for the theme and I actually learned some history!

What an interesting post! My son would be interested in this. I'm learning new things every day.

Interesting. Good until you are rumbled.

I didn't know that--thank you!

Very intersting important item from history. Sometimes the small bits of history are themost interesting, and sometimes they can be extremely important.

Those certainly were important structures.

Great information. Thanks for sharing. That was another added knowledge to me.

so interesting! i never knew ... thanks for the information!

Being German, I would rather erase the past ! It was a huge burden for my generation not knowing WHY our parents got into this mess !

i am impressed by yr post this week.
important to preserve the past i do agree

nice piece of history you got there..

Wow, very interesting! :) Great photos, and thanks for sharing this bit of history with us. :) Our human dad is an officer in the Canadian Forces, so military history is of great interest to us. :)

What an important piece of history! I can imagine how frightening it must have been to be the person inside there.

I thought I knew a little about the subject but this is completely new to me. Thanks Jams

Absolutely agree that the preservation of cultural heritage and historical memories is important. If nothing else, one should ensure that, as the motto of the Imperial War Museum goes: "That the past may serve".

I think this is just about the best one this week! You did good!!!!! I love this kinda stuff, and your lesson on the history was just tremendously enjoyed by me.

Excellent reminder of the importance in history. Well illustrated too. I have learned something new.

I love this history 'class'. Thanks for sharing! (= happy weekend!

So important when Britain was under attack by the Germans during WWII. Thanks Jams! :)

Wow i learned something today. Thanks for the piece of history.

Preservation of our past is extremely important! Thank you for the explanation and have a great weekend!

They look like one-man bunkers. The west coast of Denmark is filled with these big bunkers - made of heavy concrete during the war too.
Great choice for the theme!
Happy Weekend
L

What fascinating photos. I am always amazed at how creative we are when we have to be!

That is very interesting. History is indeed important.

I always learn something when I come here!

THanks everyone. Ah yes Mary, I am a bit old fashioned in some respects - I even use a fountain pen!

I've never heard of them before, but if they saved lives they definitely are important

Agree - some things from the past should be preserved like the tret turret. My husband said there's also a similar thing near his parents' house in Lincolnshire... but it's bigger than the ones in this picture. Great piece of historical information! Have a great weekend!!

Interesting entry. Thanks for sharing how the Tett turret played an important part in history.

Actually these are scarier to me than people shouting out at obscenities at inopportune times. Well, really you can see that at any corner bar or sports stadium.

Again you've amazed me! How come I never knew about these? As far as I'm concerned it's only just history, but that's my age showing.

thanks for sharing this info. i've learned something new today. ;) and thanks for peeking at my entry. ;)

what's wonderful about the history of this site is that it is now covered with life and flowers. If only that would happen, worldwide, right now, everywhere.

Indeed Andree, You can look across the partk and utterly forget where you are. There are a number of small reserves in teh area.