Guess where Baby Doc can stick his offer of aid. 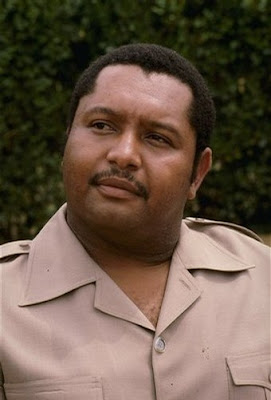 Telegraph reports that erstwhile dictator of Haiti (a human rights abuser and greedy kleptocrat.. or is the latter a tautology?) Jean-Claude “Baby Doc ”Duvalier has indicated that he wishes to donate £8m to the American Red Cross to support their relief work in Haiti.

Duvalier apparently sent an e-mail to a Daily Beast reporter Martin Papes (here is the link to the relevant Daily Beast article).

He said that he would officially ask the Foundation set up in the name of his late mother, Simone Ovide Duvalier, to transfer the $8 million (£5 million) to the American Red Cross. He said:

“It is with great horror and a profound emotion, but also with a very great concern, that I have monitored the murderous and devastating consequences of the terrible earthquake that has so piteously struck our country.

“In these hours of great national distress, my thoughts go out to the wounded, the victims, particularly the children and the youth, and their families and loved ones.”

“In spite of the gravity of the situation, I wish to tell you of my hope and my conviction that Haiti will once again find its way, thanks to an exceptional mobilisation of the life forces of our country [and] with the assistance of the international community, the path toward a true reconstruction,” he wrote.

“Haitian People, I know your extraordinary courage, selflessness, and the sacrifices that you are all capable of to save our country.”

Baby Doc became president for life of Haiti in 1971 when he was aged just 19.He inherited the title from his father, “Papa Doc”. He was deposed in 1986 after a 15-year rule plagued by brutality, corruption and a crumbling economy. He has lived in Paris ever since.

Between them Duvalier pere et fils were responsible for the deaths of around 40,000 political opponents .

Although the promised donation almost certainly came from money the venal little brute stole from the people of Haiti, some things are just too dirty to touch, regardless of the need for aid. I hope the American Red Cross tells his where to stick his donation.

Alternatively he could release every single penny he and his family still has access to then return to the country to face trial. A donation in such circumstances would be acceptable.
Posted by jams o donnell at 7:37 pm

Jams, I am supposed to be angry but instead you made me laugh. So I decided to have some fun with this and add my versions. Baby doc is a "Greedy Kleptocrat" ...or is the latter a semantic pleonasm?

look what happens when I join together twowords of similar meaning. One is null and void!

For all his misdeeds he stepped down and spared his country. This was part
of the deal for his departure.

I got the imperssion that he jumped before he has putsched

We kind of coaxed him behind the scenes. It would be a better world
if leaders cared enough about their people to depart. I think the Assad family and Khadafy klan are well over thirty years of misrule.

Saddam could be counting his loot in France if he had more sense.

One thing you will never see is the folks in Iran leaving. A strongman can do this, but a whole series of clerics is just not going to happen.

No disagreement from me on the vrious despots still in power, Bakerkin!

absolutely - his money and life!

It's degrees of comparison. Kleptocrats are rulers who steal from the ruled. Greedy kleptocrats steal more, that's all.

Well mayb enot quite his life but his money and a very long jail term Macigeye!

There is that Steve!

He looks FAR too fat and happy...

Yep. Donating money he and his daddy stolen from the country. Not a bad move.

Can't folks of Haiti do some creative voodoo on his arse?

It wouldn't be donating but returning, Jams. Presently, I'm on the phone, for hours, collecting money and supplies for "Doctors Without Borders". It's so desperately needed. I don't think that his money should be refused. It wouldn't give him absolution and approval. Actually he should be asked for a larger amount. It's the only way Haiti would get part of what he owes the country. We all know, he will never comes to justice. He should also be asked to give money to rebuild the country he has decimated. He was worse than the natural disaster which just hit Haiti.

It is an old photo... still cold and miserable would be a beter look for him, Knatolee

I would hope they got every penny back. Sadly I doubt it will happen. Good luck in getting domnations. It is desperately needed. MSF is a very worthy charity

Thanks Jams. It's working well. I don't know how it is elsewhere. But in Canada, the donations are pouring. Maybe it's because our Governor General was born in Haiti. Also, I think, because we all know that those people were in desperate need before the quake, and we were not doing much for them.

Of course, it's never enough, and we hope that it will not stop when it's time for the reconstruction.

Yes, the MSF people are great. I've been involved with them a few times, during my nursing career. No BS there I can assure you.

Of course if France offered to repay the money they extorted our of Haiti as compensation for their lost slaves, it would go a long way towards repairing the damage.

'm glad to hear that people are digging deep Claudia. I didn't know the Governor General was born there.

MSF are worth their weight in Gold.

Jams - Canada's Governor General, Michëlle Jean's family fled Haiti's François Duvalier regime when she was 8 years old. Her father (a philosopher) was tortured and separated from his family for 30 years. She would appreciate your post. Vikipedia will tell you more about her life. She still has family in Haiti, and made a moving appeal to all of us for her country.

Sorry. It's Michaëlle Jean. And you pronounce "Jean" à la Française, not like a pair of jeans.

She hsa quite s story. I hope her plea is heeded

No worries Claudia. I found her just fine

I'm very proud of Canada for people like her to be chosen as vicereine. She replaced Adrienne Clarkson who had been born in Hong Kong. Since we're allowed to put Canadians in that post, we always have Canadians of quality. Mostly non-political people. Often French-Canadians. Thanks for your interest.

I;m glad to hear this. Far better than political placemen/women. O wonder that Canada doesn't become a republic President Jean has a good ring to it!

thanks for making me smile. I doubt we'll ever leave our British Mommy.:))))

Well Duvalier definitely has some balls. He and his father tortured people and killed many (my great uncle was taken never to be seen again.), he stole from the Haitian people and now he wants to donate and help the people.... He is not a man, but a greedy, evil monster. He should keep his mouth shut! Why make a grand statement. Give the money to the country where it rightfully belongs and crazy glue his mouth shut!!!