Death marks the loss of another language 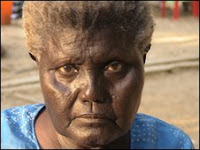 Linguist Professor Anvita Abbi - who also runs the Vanishing Voices of the Great Andamanese (Voga) website – said that Boa Sr's death was a loss for intellectuals wanting to study more about the origins of ancient languages, because they had lost "a vital piece of the jigsaw...It is generally believed that all Andamanese languages might be the last representatives of those languages which go back to pre-Neolithic times," Professor Abbi said.

"The extinction of the Bo language means that a unique part of human society is now just a memory," Survival International Director Stephen Corry said.

Another Andaman language, Khora, became extinct in November. There are major concerns about the other indigenous groups on the Islands. The Great Andamanese, numbering about 50 are considered to be most at risk because they depend largely on the Indian government for food and shelter. Two other groups, the Jarawa and the Onge number in the low hundreds.

The final group who live on Sentinel Island have resisted all contact with the outside world. As a result virtually nothing is known about them.

Languages come and languages go – we can see the traces of several lost languages in the British Isles (Yola, Norn, Cumbric etc) – but I can’t help feel that when they die something significant is lost from the rich, dark soup that makes up humanity. Boa’s passing diminishes us all
Posted by jams o donnell at 8:30 am

I see some people, including a relation of mine, are trying to revive Cornish.

Cornish and Manx have been revived I'm glad to say the revivas are a success of sorts. They live on but won't be teh main languanges of either part. Still better that than oblicion

Fascinating. Yes it is always sad when a piece of the grand and ill fitting linguistic puzzle that covers the Earth is lost. so much is tied to language - culture, attitudes, political structure, etc. I admire those who work to record and preserve the languages and dialects to be found everywhere.

I took both ancient Greek and Hebrew at university and remember how much more than just the language I learned.

Thanks Lady Macleaod.Tjere is a lot to be said in the idea that language helps define outlook. It is a terrible loss. I only studied Latin to O Level here in the UK. Sadly I have forgotten it all now

The Linguistic Professors should rush to write the alphabet, and usage rules, for the languages in danger of extinction. The people should also be encouraged to write or dictate memories, tales, songs to preserve the culture. When I was on James Bay, some missionaries had written the diffrent variations of the Cree language, from one village to the next. It was very useful. Then, when I lived in Pangnirtung, on Baffin Island, the Elders shared their thoughts and memories. It was put in a book with illustrations by Inuit artists. One of the stories starts, "There was a time when there wasn't even one white man...We were free to live anywhere in the land before the white people showed up." A bit poignant!

This is becoming prevalent and it applies to dialects in the U.S. too, e.g. in Vermont.

I agree wholeheartedly. It is a shame that it is needed as a language becomes a little like a muesum curio once the last speaker dies.

Baffin Island must have been quite an experience. I just looked up pangnirtung. The first Hudson Bay Trading post set up only in 1921, At least they avoided the white man longer than most I suppose

That is very true. they are bing homogenised and that is a pity

Jams - If you wish, google "Postcards from Pangnirtung", and you'll see how beautiful the scenery is. A bit different in my time. The Inuits lived in tents, then. The Government has built pre-fab houses for them since.

Wow Claudia that is a site I;ve bookmarked for future visits. Such beautiful scenery.

Having read this - the post and the comment - I do feel both sad and good; good and sad.
It's a pity mostly we'd raise our voice when it's too late, hm?
Lady MacLeaod put it well, and Claudia gave a fine example.

I live in an indigenous linguistic region and this topic is very dear to my Native American neighbors here in Arizona.

I cannot say it better than how one Hopi woman, who lives here, put it:

"Since the beginning we have been taught about the end. When our language dies, we are told that the world will begin dying with it."

I agree Sean. One thing that does hearten me are some of the superb comments to my own rather clumsily written posts. I am privileged to have such intelligent readers Sean

In many ways your neighbour is right. When the language dies so much of the Hopi culture will die with it.

My parents were from the north of England. Mam spent her formative years in St. Albans and so spoke what's considered to be classic English. Dad, however, was a proper Geordie and was a delight to listen to (he had wonderful stories to tell). They told me that in times not long distant that all you had to do in England to hear a different dialect was to travel five miles. Now we live in what's become an electronic uniculture. It could change and likely will in future.

Sadl the dialects are dying out Susan. The homogenisation predates the computer age but it is accelerating the process. Sadly we will eventually .

Susan's comment reminded me of my grandfather who was a fisherman in the Gaspé region, in Québec. He came to live with us, in Montréal, when he was 85, and I was 4. He was blind, and I would help him with little tasks. He had such amazing, flavourful words to describe things which I had never heard before. And I truly enjoyed hearing him and my mother in their daily conversations. After he died, 2 years later, I missed him so much. And I would ask my mother, "Speak to me with Pépère's voice."

It's all lost now. I only remember a few words of his rich vocabulary.

Wow Claudia it must have been a joy to hear him speak. Sadly I can only imagine that a lot of his dialect has gone forever. A terrible shame