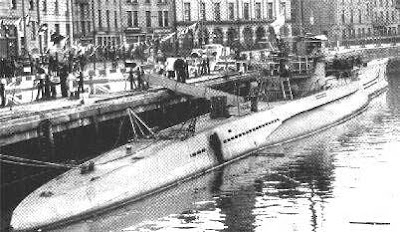 This may or may not be a photo of U-1206. the vessel with a strange (or at least the cause of its end was strange) in maritime history.

U1206 emblem
On 29 March 1945 it left its base in Kiel on a training patrol under the command of Kapitanleutnant Karl-Adolf Schlitt. On 14 April it suffered a malfunction and surfaced near Peterhead only to be bombed ad sunk. presumably by Coastal Command aircraft.

Nothing strange in any of that I suppose, but then it is the malfunction that is strange. U1206 was fitted with an advanced high pressure deep water toilet system that permitted them to be used at depth. Flushing them was rather was complicated and apparently required trained technicians

On its last day a crew member did not use the toilets (or should that be heads) and this caused serious flooding. Schlitt had no option but to surface....

Email ThisBlogThis!Share to TwitterShare to FacebookShare to Pinterest
Labels: toilet, u1206