Not Cliff, but Jesus 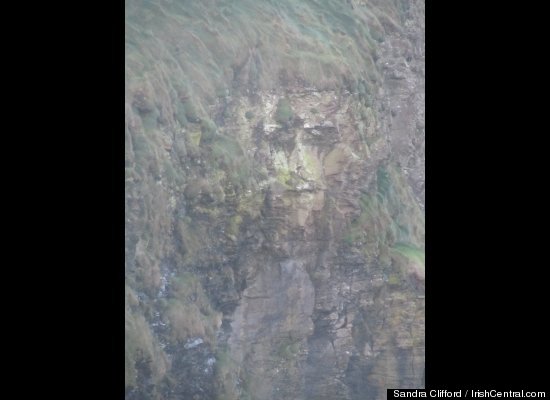 The Huffington Post has news of another great simulacrum. Visiting this one may be for extreme sports enthusiasts though!.

THis time Jesus has appeared on the side of a cliff in Ireland. Tourist Sandra Clifford's picture has got a lot of people excited.
Clifford, a pilot fron San Francisco, spotted the figure recently while visiting the Cliffs of Moher in County Clare with her friend, Fiona Fay.  The two saw what Clifford thought looked like the image of Jesus on the side of one of the cliffs and she immediately snapped a photo on her digital camera.

"I definitely felt a divine presence," Clifford told HuffPost Weird News. "To me, it was definitely a face, but I realize some people may interpret it differently."
Clifford feels her training as a pilot has honed her vision and also taught her to be skeptical about what she sees, which is why she asked the folks around her their opinions of the cliffside Christ.

She is curious that the Jesus image hasn't been seen before since she usually sees at least five tour buses going to that same viewpoint and none of them have reported a similar sighting.
Clifford is amazed as well."I found this image amazing. This entire day was incredible," she said. "The only way I can describe how I felt when I saw the image is very calm. It was absolutely beautiful and quiet.

Clifford wants to make sure that no one can make claims that the photos have been retouched, so she is removing the disc with the photos from her digital camera so they can be saved as they are forever.

She has refused all attempts to touch up the photograph back in the United States, insisting she wants to maintain its originality.

Well there you have it. Perhaps someone committing suicide at that point can make peace with Jesus as he or she passes by....
Posted by jams o donnell at 3:48 pm

Email ThisBlogThis!Share to TwitterShare to FacebookShare to Pinterest
Labels: Cliffs of Moher, simulacra

I bet you expect me to be seeing Billy Connolly here, but no, it looks like Guy Fawkes (as he is commonly represented) to me. As for Jesus? If he could come back I'm sure he would, just to point at all the paintings and scream, "I didn't bleedin' look like that!" Trouble is nobody would recognise him.

Very true and if he were to be recognised he would get the chair!