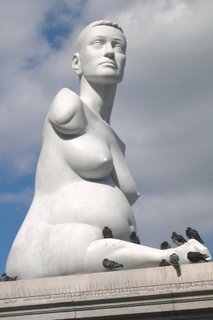 Marc Quinn’s statue of the artist Alison Lapper currently occupies the fourth plinth in Trafalgar Square. Originally intended for a statue of King William IV (1830-37) which was never made, the plinth remained empty until recent years. It is now used to showcase outstanding examples of modern sculpture.

Although the statue may appear is a shade incongruous resting as it does in a square overshadowed by Nelson’s column and accompanied by an equestrian statue of one of our poorer monarchs and a pair of forgotten 19th century generals it remains a work of outstanding power and beauty. 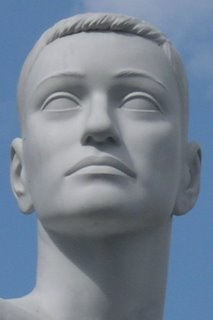 It will be replaced next year by another statue. I hope that it finds a good home in a major public gallery when it leaves Trafalgar Square.

A pity it will be replaced. Good pics.

A pity indeed even if it looks a littel out of place in Trafalgar Square. That said it throws the forgotten victorians into sharp relief

Bit more significant than the forgotten victorians too

What a remarkable woman she is. I'm in complete awe.

thank you, i enjoyed knowing her,the statue is glamorous.

Hi Minoo. Thanks for visiting, I hope you liked my earlier post about your work.

I love the statue. While it won't be on display in Trafalgar Square for long I hope it has a home in the Tate Gallery or another big gallery. It really deserves to continue to be seen by millions.