Americans in the SS

Compared with what is now available on the British Free Corps (BFC) there is a dearth of information on the Americans who fought for Germany in WWII. Frustrating as this is , what little there is out there is still quite interesting

There is no reliable estimate of the number of Americans who fought for the Reich. Marcus Wendel’s excellent Axis History Factbook notes that in 1940 there were five US citizens in the Waffen SS in May 1940 and at least eight Americans died in its service during the war. Only two Americans are named Martin Monti and Peter Delaney. Both served in the journalism unitSS Standarte Kurt Eggers and Delaney appears to have been killed in 1945. 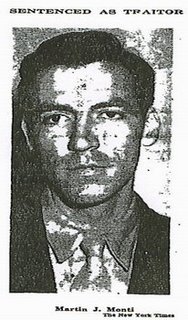 There is more information about Martin Monti . A lieutenant in the USAAF, Monti was also a hard line catholic who viewed the Reich as the bastion against communism. In 1944 he deserted his unit in India and made his way to Italy where he was able to take an F5 (a reconnaissance version of the P38 Lightning fighter) and fly it to Milan which was still in Axis hands. He ultimately gained the rank of 2nd Lieutenant in the Kurt Eggers unit and broadcast on Italian fascist radio.

After the war Monti was initially tried only for theft of the aircraft and after a sentence of hard labour he was able to rejoin the newly formed USA, finally leaving 1948. It was only after this that he was arrested and convicted for treason. Sentenced to 25 years in prison he was paroled in 1960.

Hstuf (Captain). Josef Awender, a medical doctor in the “Frundsberg” born in Philadelphia in 1913,
Ustuf (2nd Lieutenant). Robert Beimes, a signal officer in the “Hitler Jugend” born in San Francisco in 1919, whose father was a translator in the SD,
Ustuf. Dr. Hans Eckert, born in Buffalo, NY in 1917 and assigned to the SS hospital at Dachau in November 1944,
Ostubaf (Lt Colonel) . Viktor Fehsenfeld, born in Elk Rapids, Michigan in 1984 and an administrative officer in the SS-WVHA,
Hstuf. Franz Stark, born in St. Louis in 1901 and assigned to the SD,
Hstuf. Eldon Walli, born in New York City in 1913 in the SS-Kriegsberichter
Abteilung (war reporters)
Hstuf. Paul Winckler-Theede, born in New York City in 1912 and who was a military judge in the “Das Reich” division.

It is claimed that their records are available in the Berlin Document Centre. Whether this is true or not I have no idea. There is no indication whether these had renounced their citizenship before joining the SS or if they were tried after the war.

There are rumours of an American SS unit called either the American Free Corps or the George Washington Brigade. However, this appears to be just a rumour and there is no evidence whatsoever the Germans attempted to recruit American POWs for a waffen SS unit

It is a shame that little research has been done on this subject. Perhaps a historian will take it up at some stage. There is rather more information on the Americans who broadcast for Germany and Japan during WWII and I will probably talk about them at a later date
Posted by jams o donnell at 1:39 pm

Thank you James, an interesting subject that has obviously been deemed impolite conversation for the table by the good guys. History is written by the victors. At least for the masses. Information is certainly out there, but finding it and piecing it together is not always easy. Particularly on embarrassing subjects to national pride, and the image of just victor.

When part of the truth goes unknown and untold, can we really say we know the truth of something?

interesting stuff. Noted a reference in Band Of Brothers. But of more accuracy is the account of Charlie Daley who survived the Wormhout massacre in 1940. He reported a German soldier, speaking fluent English but with a pronounced American accent. This soldier was with LSSAH.

It could be a German who lived in teh US for a long time before returning to Germany. There were a number of them in the German forces during WWII