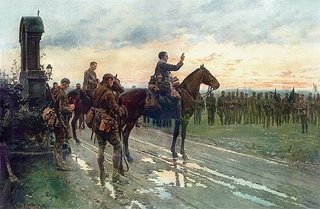 Sadly I know very little about the history of either side of my family, a fact not helped by the early death of all of my grandparents (Only my maternal grandmother was alive when I was born and she died before I was old enough to take an interest in such matters) and my parent’s own rather fragmentary knowledge.

What I do know about my family beyond my parent’s generation is:

- My paternal grandfather served in the Second Battalion of the Royal Munster Fusiliers (2nd Munsters) and was apparently taken prisoner at the battle of Mons in 1914. That he survived that terrible conflict is probably down to his spending over four years in Germany as a “guest” of the Kaiser! The only photograph I have ever seen of him was taken in a POW camp in what used to be East Prussia.

All in all this is not an awful lot to show for two fairly sizeable families. Virtually every document or personal item that would help me trace my family history has vanished over time. Yesterday, however, I searched the WWI service medal database at the UK National Archives website and I was delighted to find a medal record for a private in the Munster Fusiliers bearing the exact same name as my grandfather who arrived in France on 13 August 1914.

This piece of information would place him in the British Expeditionary Force (BEF) at the start of WWI. It is a matter of record that on 23 August 1914 the BEF engaged the German First Army around Mons but the 2nd Munsters were held in reserve and did not participate in that battle. In addition the 2nd Munsters did not participate in the battle of Le Cateau on 26 August.

The 2nd Munsters’ contribution to the Mons Campaign took place on 27 August at Etreux. At the time the BEF was in retreat and in extreme danger of being surrounded and destroyed by advancing German forces. Three companies of the 2nd Munsters under Major Charrier along with a troop of the 15th Hussars, and two guns of the 118th Battery, R.F.A., held off a full German Corps for a day taking appalling casualties in the process. This action allowed General Haig’s I Corps to put twelve miles between itself and the front almost certainly ensuring its survival as a fighting force.

The Action is a tiny footnote in a conflict that took millions of lives but it is a textbook example of the function of a rear guard force. I cannot demonstrate absolutely that my grandfather was actually taken prisoner there and I may never be able to but this must be a prime candidate.

There are two excellent websites concerning the history of the Royal Munster fusiliers:

Both carry the account of the Etreux action from The 2nd Munsters in France by Lt Col H S Jervis;

wikipedia entry on the Battle of Mons

Genealogy is so intriguing. My husband is our resident expert on such things and has discovered many "miracle" babies born to my ancestors just five months or so after marriage and they survived. We also have a history of divorce way before the trend, and records of family members dying from impaling themselves on pitchforks. Yes, this happened more than once. I'm descended from promiscuous people with a proclivity for farming accidents.

Can I borrow your family history record? It's much more esteemed.

Ah you must realise that as I sit here I am merely taking a break from yet another rendition of duelling banjos......