Victory for the Chagos Islanders 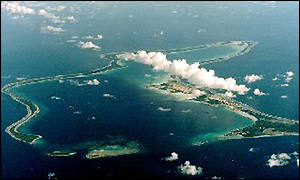 Diego Garcia
There was excellent news for the Chagos Islanders yesterday as they won the right to return home following a High Court victory. In what was a scathing verdict, the judges condemned as "repugnant" the government's decision to "exile a whole population" from the Indian Ocean archipelago on the basis it was necessary for "peace, order and good government.

The Islanders were removed from their lands between 1965 and 1973 to provide the US with a military base at Diego Garcia and dumped on Mauritius and the Seychellles.

A previous court victory in 2000 was not initially contested but after American pressure the government made an order under the Royal prerogative, declaring that no person had a "right of abode" in the British Indian Ocean Territory. Yesterday’s victory overturns that ruling.

The original action placed a stain on the United Kindgom which needs to be redressed. Under no circumstances should the government place any further obstacles in the Chagossians’ way regardless of any further pressure exerted by the USA. Rather it should give them full support and substantial assistance to rebuild their homes and livelihoods.