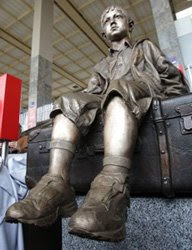 This is rather a late post about the unveiling of a Kindertransport memorial in Vienna. The text and the photos were provided by the artist Flor Kent and are used with her permission.

In a dignified ceremony a sculpture pays tribute to Britain. Für Das Kind- Vienna at Westbahnhof Railway Station commemorates the kindertransport operation which saved the lives of thousands of children 70 years ago


"And the distant whistle of the train / now in my ear still rings. What's going on? Nothing. Some Jews go into the wide world." Recited by actor Cornelius Obonya, the poem "Jews at the station" by Walter Linden opened last Friday's moving ceremony surrounding the unveiling of "Für Das Kind- Vienna by Flor Kent at Austria's Westbahnhof station.

The event coincided with the 70th Anniversary of the Anschluss and was inaugurated by Austria's Minister of Transport Werner Faymann and Chief Rabbi Paul Chaim Eisenberg in the presence of hundreds of "kinder" and descendants from all over the world. For many of them, now in their seventies and eighties, it was their first time back in Vienna since their escape as children with the Kindertransport.

During a period of nine months in 1938-39 - before the outbreak of the Second World War - 10,000 mostly Jewish children from Germany, Austria, Czechoslovakia and Poland were saved from persecution by the Nazi regime and brought to Britain. The Kindertransports were organized at the time with the help of Christians of many denominations, Christadelphians, Quakers and Jews together. Austrian children went from Vienna-Westbahnhof Railway Station in the direction of Holland, where they travelled in ships to England.

"We celebrate today a rare moment of light at a time of true darkness. The elements within the work offers evidence and witness to this historical event" said Kent. 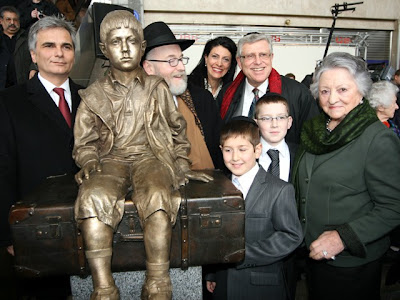 An emotional high point for numerous survivors was the appearance of the boy who served as a model for the artist to use in the memorial: the nine-year-old Sam Morris in the company of his great-grandmother Sara Schreiber, and who spoke on behalf of the "kinder". ". Without the help of courageous people who helped during the persecution "I would not be born, my statue would not be here because I would not exist. It will remind everyone how precious life is” said the lad with a broad English accent.

It is the small boy in Kent's sculpture which sits on a large suitcase looking into the distance. Over 200 "Kinder" and their descendants from all over the world attended the ceremony. Milli Segal, initiator of the project, recalled the 10,000 rescued children in view of to the one and a half million children murdered "on the conscience" of the Nazi regime.

For most of this occasion was their first time in Austria since they left as children 70 years before. Schreiber said "I left Austria from this station and was with my mother here for the last time . I have in my head my last picture of her in this place, "Auf Wiedersehen" she said. Schreiber was saved by Rabbi Solomon Schonfeld, who personally rescued more than four thousand children and many other thousands of Jews from the clutches of the Nazis. Other Kinder saved by Christadelphians and Quakers also talked about their experiences.

Minister Faymann said the appearance of Sam Morris was a sign "that the next generation will not forget." "During the Nazi terror regime humans were often sent from the stations to their deaths, this action succeeded to send people also from this station to life." Peter Klugar, chairman of OBB Holding Company, said: "This always has to be heard about so that it never happens again". 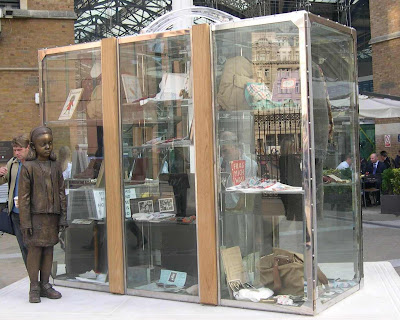 I know I have said this several times before but I loved the original kindertransport memorial at Liverpool Street station. I would spend a lot time looking at the memorabilia the children brought with them, family photos (virtually of the adults were murdered during the Holocaust), books (you can see a copy of Struwwelpeter top left) , a glove puppet of a Siamese cat. The memorabilia is now at the Imperial War Museum. The statue itself has not yet got a new home. I hope it will - it deserves to be seen.

That is a beautiful statue. So good that it was done while survivors were still alive.

I'm surprised they would move this all the way to Vienna. That's odd. Anyways, I'll be seeing a lot of reminders like that in Prague next week. :o

That is a rather lovely statue. The post reminds me of The Book Thief which I have just finished reading.

It was long overdue Liz.

It was the embarkation point for a lot of the kinder LB. Others came out of Prague. A local resident Bill Barazetti Did a lot of work to get kids out of Prague.

A kind of coincidence, Jams. This evening I happened to hold a small brochure in my hand - with pictures showing children after they had left a station 'into the other direction'.

Yes, I think it is good to remind ourselves of both, the murderous and the empathic in human nature.

Rather a nice idea, really.

I agree Sean. The Holocaust must be commemorated. It cannot be forgotten. However the actions of those who tried to make a difference must also be remembered. The kindertransportb organisers, the Rosenstrasse women, the White Rose, Helmuth Hubener for example, represent part of what makes our species worthwhile.

Well there you go Sam!

Fair play to you Sam!