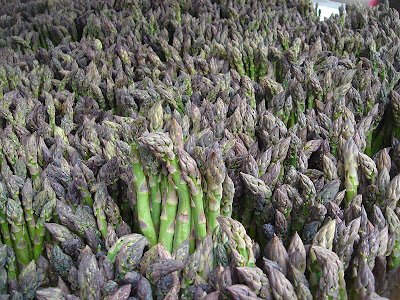 Just a few months ago were warned that Mars was too probably salty to sustain life – apart maybe from little green men with high blood pressure. These were based on findings from the Opportunity rover. Now it seems that preliminary analysis by the Phoenix Mars Lander mission on the planet's soil found it to be ideal for growing asparagus

Scientists working on the spacecraft project said they were "flabbergasted" by the discovery. "We basically have found what appears to be the requirements, the nutrients, to support life, whether past, present or future," said Sam Kounaves, the project's lead chemist, from the University of Arizona. Although he said further tests would have to be conducted, Mr Kounaves said the soil seemed "very friendly… there is nothing about it that is toxic... You might be able to grow asparagus in it really well."

As well as being far less acidic than anticipated, the soil was also found to contain traces of magnesium, sodium, potassium and other elements. The analysis is based on a cubic centimetre of soil scooped from 2.5cm (one inch) below Mars' surface by the lander's robotic arm. The sample was then tested using the "wet chemistry" technique, which involves mixing the soil with water brought from Earth and heating the sample in one of the lander's eight ovens.

Demetrios Liliopsidas, spokesman for the European Asparagus Growers Association gave a guarded welcome to this discovery: “world-wide asparagus are doubling every 5 years. By 2040 there will simply not be enough arable land on Earth to satisfy demand. We need to consider other growing locations so to hear that Martian soil is perfect for growing asparagus is excellent news. We are concerned, however, that the asparagus will not be very fresh after a 50 million mile journey.... We may have to wait for the development of warp technology before exploiting Mars”

Sweet. Now if we can just get the transport logistics down, we can cheap alien asparagus!

Just think of the food miles though!

The carbon credits would be astronomical! You won’t be finding them at your local farmers market I reckon.