When is a Goya not a Goya? 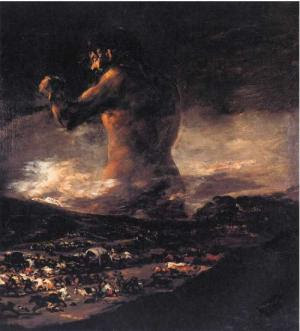 Francisco de Goya's image El Coloso a brooding giant rising above a stampede of terrified people and animals, has held pride of place for decades in Madrid's Prado museum. But it now seems that it was not painted by the great artist at all: the Prado has announced that it was probably painted by a pupil in his studio.

The museum's chief Goya specialist said the painting, made during Napoleon's occupation of Spain after 1808 and long seen as one of the artist's most dramatic portrayals of the horrors of war, was "a pastiche"."Stylistically, it is completely alien to Goya," said Manuela Mena, the Prado's senior Goya specialist who has studied El Coloso and doubts over its attribution for nearly 20 years. She also revealed doubts over at least three other Goyas held by the Prado.

Ms Mena, presenting the conclusions of a meeting of international specialists in Madrid, described El Coloso as photogenic, attractive and influenced by Goya. But she said it could not have been his work."The person who painted the bulls in El Coloso knew nothing about the anatomy of a bull – which Goya knew everything about," Ms Mena said. "The donkey looks like a furry toy, nothing like Goya's perfectly executed donkeys of the same period. None of the details correspond to the Goya we know."

The British art historian Nigel Glendinning has long argued that Goya painted El Coloso, because of the strength of the composition, its audacious centrifugal dynamism. "I have no objection to authenticity being challenged, but we need arguments backed up by facts," Professor Glendinning said. "I look forward to studying the findings in detail."

It does seem strange that it’s taken this long to conclude that one of Goya’s most famous images painting was in fact probably by a student. Then again, when something is a given for a long time it can be a very brave person to say otherwise...
Posted by jams o donnell at 8:17 am

There has to have been some input from the Master.
Surely the message is more important than nit-picking?

Good point Aileni. It's still a magnificent work of art

Absolutely. Does it make any difference to the quality of a painting if it turns out that someone else did it?

Whtehter it's Goya or not, it's brilliant!

the Prado has announced that it was probably painted by a pupil in his studio.

This hardly detracts though.

Not at all James