A new monument to victims of purges

The Russian city Zheleznovodsk has just unveiled a moving and timely monument to the purges. The monument takes the form of a sculpture that is 5ft tall, weighs 800lb and features a base of three Botticelli-style angels. The angels support a bronze enema bulb. 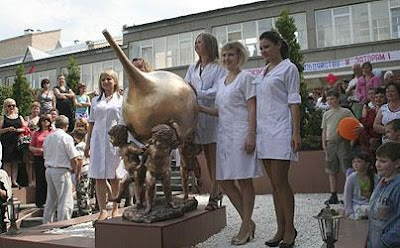 The Caucasus mountains region is famous in Russia for dozens of health spas. Many offer enemas with water drawn from mineral springs, that are said to treat digestive and other complaints. The statue was revealed at the Mashuk-Akva Term spa in Zheleznovodsk

"There is no kitsch or obscenity, it is a successful work of art," Alexander Kharchenko, the spa's director, said. "An enema is almost a symbol of our region." Mr Kharchenko said the monument had cost the spa £21,000. It was installed in a square in front of his spa, with an accompanying banner declaring: "Let's beat constipation and sloppiness with enemas" posted on one of the spa's walls.

The sculptor, Svetlana Avakina, said she had designed the monument with "irony and humour" in mind and was inspired by the works of Italian Renaissance painter, Alessandro Botticelli. "This device is eternal, it will never change," she said. "We could promote this brand, turn it into a franchise with souvenirs and awards for medical doctors."

So there you have it. If the enema was provide by government would it be an enema of the state...... Sorry I couldn't resist that one

I thought this had to be a joke too. But it's still a funny story!

I am trying to ignore your joke ;-)

Do you know where one may acquire a replica for one's garden?

That statue is ridiculous.

It is an odd one eh cherie!

Ridiculous World, I bet they would make a mint if they offered replicas for sale, even in stone.

I wonder what they'll make of it in 500 years time.

It may become an object of veneration jmb!

It's all fun and games until some perv tries his hand at performance art and the monument becomes the most expensive enema ever administered!

I daresay someone will try it EWBL!

I love everything about this story from the absolute absurdity to the sexy nurses. Fantastic.

It's a great story isn't it Chris!

Wish I could have this every day.
I mean such a story. :)

It is a good one eh? I could not resist posting it