Farewell to a modern Casanova 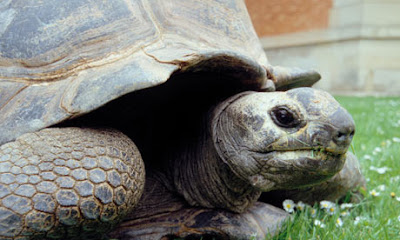 France is in mourning following news of the death of its greatest lover - a giant tortoise named Kiki, who died at the age of 146.

Staff at the Ménagerie du Jardin des Plantes in Paris announced that its veteran resident had succumbed last week to an infection. Kiki’s "demonstrative lovemaking" had made him a favourite with the French public.

"We are rather upset to have lost Kiki. He had been here for such a long time …that we had kind of thought of him as eternal," said Michel Saint Jalme, the deputy director of the Ménagerie. "He had a kind of charisma … a certain personality."

Kiki who arrived in Paris in 1923. According to Marie-Claude Bomsel, a vet at the zoo, he was so vigorous in his pursuit of female tortoises that his grunts could be heard from the other end of the zoo and the Jardin des Plantes.

"To be honest, from time to time I even saw him go after a wheelbarrow. You see what we were dealing with," Bomsel told French radio. "That was one of his characteristics. We all loved him."

Kiki weighed 250kg and had to be moved about using a forklift. There is no record that he ever tried to molest the forklift

Ah well farewell Kiki. You are a role model to all men of a certain age!
Posted by jams o donnell at 8:27 am

In one of my dives, a sea-turtle looped around me 3 times. It even let me touch her (or him). It was one of the most amazing experiences of my life.... They truly are beautiful and charismatic creatures.

We need a joint national day of mourning.

I was just reading about this. RIP Kiki, you frisky old thing.

Indeed Stan. Don't you wish you had that vim and vigour at 146!

Jams: In one sense, I do wish it; in another, I worry that they'd lock me up after I had a go at the wheelbarrow.

Perhaps! And sure I could rest in it afterwards, in my dotage, and nurse the wounds.

And still active too!