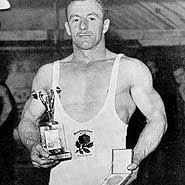 If there was a poll to find Britain’s greatest Olympian it is pretty certain that Sir Steve Redgrave would win by a country mile. His feat of winning gold medals in five consecutive Olympics (From Los Angeles to Sydney) is bettered only by the six times Olympians Hungarian Fencer Aladar Gerevich (Team sabre champions Los Angeles, Berlin, London, Helsinki, Melbourne and Rome) and German Kayaker Birgit Fischer (Moscow then Seoul to Athens).

But spare a thought for Jim Halliday who won a bronze medal in the weightlifting lightweight division at the 1948 games in London. What makes a bronze medal won 60 years ago in an event where British success is rare? Just three years before Halliday had been a Japanese prisoner of war and had shrunk in weight from 71kg (10 stone 12lb) to 38kg (about 6 stone).

Halliday began lifting at the age of 15 and had won the Lancashire lightweight title in 1936. He was called up into the Army at the start of the Second World War and had fought in the rearguard defending the evacuation at Dunkirk before being evacuated later at Boulogne. His regiment was later sent to Singapore where he was taken prisoner by the Japanese in February 1942.

Despite the conditions in Burma, he retained some of his natural strength - when one camp did not make a primitive barbell using tree trunks, none of the inmates nor the Japanese guards could lift it overhead. However, when Halliday was fetched from a neighbouring camp, he succeeded. As a result, the Japanese commandant further cut the rations because he believed the Britons were getting too strong.

After the war, Halliday started weightlifting again simply to recover his former bodyweight. However, competition again attracted him and he took part in the 1946 World Championships and in the 1948 Olympics, where he was third behind the winner, the outstanding Egyptian lifter Ibrahim Shams. Halliday took gold medals and the 1950 and 1954 Empire Games (now known as the Commonwealth games).

Jim Halliday died on June 6, 2007, aged 89. His achievement goes to show that it is not just the champions who are the great Olympians. Recovering from horrendous ill treatment as a POW to medallist is a magnificent feat by anyone’s standards.

That's indeed what the Olympic spirit is or rather should be about.
Good story, Jams.

A worthy feat indeed for this remarkable man, to comeback to Olympic standard.

THanks Sean. jmb to get back to olympic standard after what he went through is amazing.

An exceptional man indeed. Thanks for sharing the story, James.

Jams, I mean. Yikes these typos...

This is much more awesome than the stories of steroid use that plague wrestling today. This guy was a natural wonder.

He certainly was an exceptional man whose story deserves to be heard and better than my preecis of his obit.

May I suggest a link related to the Beijing 2008 Olympic Games?

Please let me know if you want a link back.
Many thanks for your reply.

I well remember Jim Halliday from the pages of the old magazine 'Health & Strength' when he returned as a champion weightlifter after his horrendous treatment at the hands of the Japanese.He represents the true value of Olympian ideals and is a credit to his sport and his generation.