Great sporting events in Havering are a little thin on the ground - Romford once made the quarter finals of the FA cup back in 1881 and two women's world best times for the 1500m were set at Hornchurch stadium in the 1950s. The only boxing match of note in the area took place in Hornchurh in 1795 when Daniel Mendoza fought Gentleman John Jackson for the Championship of England. This fight took place in the days when pugilists had such fine names as Tom Cribb, Jem Belcher and the Game Chicken (Henry Pearce) 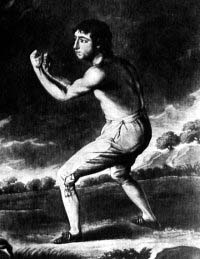 Daniel Mendoza (5 July 1764 - 3 September1836) was a true pioneer of the "sweet science" . In an age when other boxers generally stood still and merely swapped punches. Mendoza' had a  "scientific style" which inluded much defensive movement. He developed an entirely new style of boxing, incorporating defensive strategies, including , moving around, ducking, blocking, and, to avoid punches. As a result he was able to overcome much heavier opponents. This was essential as  he stood only 5'7" and weighed only 160 pounds,  In 1789 he opened his own boxing academy and published the book The Art of Boxing  which every subsequent boxer learned from.

Mendoza won the Championship of England in 1792. The previous champion, Benjamin Brain had retired the previous year. He beat contestant Bill Warr over 23  rounds in a fight in Croydon. Warr fought Mendoza again in 1794 but lasted just 15 minutes. 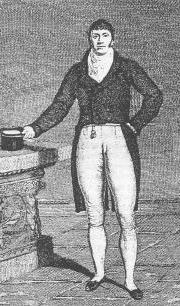 Gentleman John Jackson   (28 September 1769 – 7 October 1845) came up to the scratch against  Mendoza on 15 April 1795 in the Dell, near St Andrew's church in Hornchurch . Viewed by  3,000 spectators, the fight was expected to go Mendoza's way, However Jackson,with a five year age advantage, as well as being four inches taller and 42lb heavier bested Mendoza over 10 rounds. Mendoza's long hair was the main source of his defeat. Apparently Jackson grabbed hold of his hair and pummeled him mercilessly.

After the fight Mendoza had many careers but eventually died in poverty in 1836. Jackson set up a boxing salon which was popular with the gentry - Lord Byron received instruction in boxing there. He is aparently mentioned in a number of Georgette Heyer novels.
Posted by jams o donnell at 3:14 pm

Queen's Theatre ran a community play on this back in 1998 called Champion of the Horned Church.

I didn't realise that.