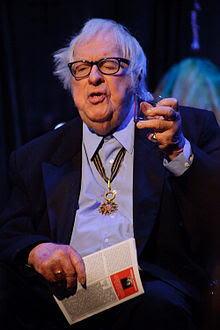 Ray Bradbury, one of the greats of science fiction has died aged 91. His books Farenheit 451 and the Martian Chronicles are two of the best of the genre

His grandson, Danny Karapetian, said: "If I had to make any statement, it would be how much I love and miss him, and I look forward to hearing everyone's memories about him... His legacy lives on in his monumental body of books, film, television and theater, but more importantly, in the minds and hearts of anyone who read him, because to read him was to know him. He was the biggest kid I know."
Bradbury was born in 1920 in Waukegan, Illinois, moving with his family to Los Angeles as a teenager. His first collection of short stories, Dark Carnival, was published in 1947. His best known books were published in the early 1950s. He has a star on the Hollywood walk of fame.In addition to novels, Bradbury wrote screenplays and scripts for TV shows such as Alfred Hitchcock Presents and The Twilight Zone (The Wonderful I Sing the Body Electric).

Tis a shame to learn he has passed away. To be honest I didn't realise he was still with us. Used to read his stuff when I was younger, always been blessed by his work. Think his Illustrated Man was my personal favourite.

It is a fine novel. well he did have a qood innings

Definitely a classic writer and a true favorite of mine.

As you could tell, it was his Farenheit 451 that deeply touched me. I am thankful.

David said...
This comment has been removed by the author.
6:31 am

Susan Sean, David Thanks for your comments. It is lear that Ray had an effect on all of us

Such a good writer. I loved so many of his stories.

An awesome writer. May have to revisit him. Dandelion Wine, The Illustrated Man, Something Wicked This Way Comes... though I confess I couldn't get into Farenheit 451 and didn't finish it.

I am sorry Bradbury is gone. I realize it is heresy to say I was not fond of his work, but he was an icon of an age of s/f, and we will miss him for that if for nothing else.

A sad loss. I get the feeling that a lot of people will be reaching to their bookshelves to give him a new read