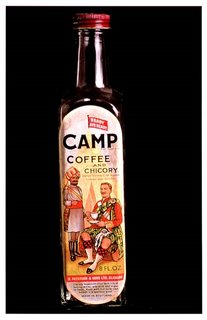 This interesting but squalid story from the Days of the British Empire appeared in Independent. It is a story I had never heard before.

When the inventors of Camp Coffee needed an image to market their new product 121 years ago, it seemed little could do the job better than a Scottish soldier sitting down for a brew in a far-flung corner of empire. To ensure Victorian consumers got the message that they were drinking the same treacly caffeine concentrate designed to fortify soldiers subduing the colonies, the kilted Gordon Highlander was shown being brought his drink by a Sikh manservant. Over the past century, the relationship between manservant and master changed to reflect attitudes towards the colonial era: by the 1980s, the Indian servant had lost his tray; a new label will now show the Sikh soldier sitting beside his former boss - and with a cup and saucer of his own.
Times and attitude rightly change but the Victorian soldier remains constant. The image is based on a Victorian military hero, Major General Sir Hector Macdonald, an ordinary soldier who turned down a Victoria Cross in favour of a commission and attained high rank. That the man who was known as "Fighting Mac" is now forgotten is evidence of a fall from grace which ended in him taking his own life after a whispering campaign suggesting he was a homosexual. Macdonald, shot himself in the head in his bedroom in a Paris hotel on 25 March 1903, apparently minutes after reading a front-page story in the New York Herald suggesting he faced a "grave charge". 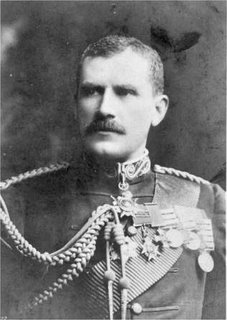 Hector Macdonald was born in 1853 in Dingwall, Scotland to a crofter and a dressmaker. He was an apprentice draper when he persuaded a recruiting sergeant from the Gordon Highlanders to accept him for training at the age of 17. A professional soldier he spent most of his 33 years in the Army in the outer reaches of the empire was held in such esteem by some of his compatriots was proof at least of a popular reputation built on stories of his talents as a military tactician and bravery as a commander.

While serving in Afghanistan in 1879 as a regimental sergeant, he distinguished himself in battle to the extent that he was given the choice of a Victoria Cross, the ultimate military accolade, or a rare commission as an officer. He is reputed to have accepted the commission with the words: "I shall win the medal later." Macdonald was credited with saving Lord Kitchener's imperial army at Omdurman - the Dervish stronghold across the Nile from where General Gordon of Khartoum was killed. At the head of his highly trained brigade of Sudanese troops, Macdonald repelled a counter-offensive by 20,000 Dervishes with the loss of only 48 men and 382 wounded. A young Winston Churchill, reporting on the battle, wrote how, at one point in the battle, Macdonald called his officers around him and rebuked them for "having wheeled into line in anticipation of his order and requested them to drill more steadily".
MacDonald was appointed military commander in Ceylon (now Sri Lanka) in 1902. A letter, printed in The Times of Ceylon shortly after he said: "You know, we heard a whispered rumour that he does not like ladies, and possibly may have been pleasantly surprised to find he had dropped on a spicy little isle where ladies are few and far between.”

Although well-loved and respected by his subordinates, it is suggested that the jealousy of his superiors boiled over in Ceylon in 1902 when he yelled at the Governor, Sir West Ridgeway, to get off his training ground during manoeuvres. It was Ridgeway's reports back to London which resulted in the decision that he should face a court martial. Others suggested that Lord Kitchener, leader of the British Army Sudan, ordered a whispering campaign against the general after he was humiliated by Macdonald's brilliant rearguard action in the Battle of Omdurman in 1898.
The accusation was one of homosexuality, an offence considered extremely serious and in keeping with the mores of his era, Macdonald decided even the allegation was a death sentence. Such was his status in Britain that news of the circumstances of his death brought an immediate backlash from a doubting civilian population. The establishment was forced to offer the family of the dead general a full state funeral when his previously unknown wife, Edinburgh-born Christina Duncan, arrived in Paris with their young son to collect her husband's body.

Even after death, the besmirched general continued to have a hold on the popular imagination. Rumours swirled around that, tired of his treatment by the Army, Macdonald staged his suicide to assume the identity of a German cousin, August von Mackensen, who was of a similar age and reported as being "gravely ill" at the time of the suicide attempt. Von Mackensen, who rose to the rank of field marshal in the Prussian army, miraculously recovered and suddenly discovered military skills he had not previously possessed. German propagandists wasted little time in perpetuating the idea of a betrayal by Macdonald in leaflets dropped behind British lines during the First World War.

What may have been seen as normal in the Victorian era seems so inappropriate in our time. That is not political correctness but our perception of the world. The story of Sir Hector Macdonald a sad one but the biggest shock of all is that anyone actually drinks the dam stuff!

I LOVE treacly caffine, especially if it's served to my by a racist stereotype- and someone died, too? De-lish! Too unfeeling? Why, I took the DIY quizzes, and while you're smarter (big shocker, not) I'm considerably more evil. Yay, go Team Satan!

That you are more evil than me is never a surprsie Mme F! are you back biting the heads off whippets again??

Great story! A true hero. I hope he really was gay, despite a wife. And I also hope he actually did join the Prussian Army. That would have been a perfect revenge.

It would have been so fitting if he had Sonia. He may or may not have bee gay in reality but I have no doubt the was fucked up the arse by the establishment.

I am surprised I had not heard of him before. It is unusualfor such a tale to have passed me by!

I'm surprised there's a market, you can get that sort concentrate in any military mess hall from the urn about an hour after dinner.

Amazing. I'm familiar with with von Mackensen, but never heard of MacDonald. I should have, because I've done a lot of reading on the "Great Game", albeit most of it in Russian, and no few accounts of the Mahdi in Sudan. [The Madhi is the folk hero who will lead Islam to victory, like Arthur.]

Ach my russian runs nowadays to ordering a beer and telling someone to f**k their mothers! Perhaps unusually my school offered Russian as the second foreign laguage..

It is strange the history lottery: a few characters survive while others get consigned to oblivion. It says a lot about the man that the makers of Camp Coffee decided never to remove his image from the label.

Well, you know how I feel about people named Hector. :) The fact that this man is the spitting image of Freddie Mercury does not bode well for the validity of the homo rumours! Maybe he switched sides because German men wore tighter uniforms and carried crops with them?

Ah the penchant for the big full moustache.. I daresay there could ahve been truth in teh rumour, or it couls simply have been a whispering campaign by his enemies..

Serioulsy I love the idea of him taking on the identity of Mackesen and carrying on well into old age... Cant say I would fancy the riding crops, but the boots.. What man could resist!