When the East End said “No Pasaran” 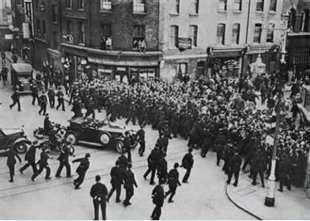 Next wednesday marks the 70th anniversary of the “Battle of Cable Street”, a day when the people of the East end united in defiance of Mosley's British Union of Fascists (BUF) and refused to let them march through their streets.

Shouting the Spanish civil war slogan "No pasaran" thousands (more than 300,000 according to the Daily Worker, the Communist Party newspaper) of East enders turned back a Blackshirt (another name for the BUF - not surprisingly on account of their predilection for wearing black shirts) march that was intended to be a general show of its strength in the area and to intimidate the local Jewish community (The east end at the time was home to s substantial proportion of Britain’s Jews).

The Jewish Board of Deputies had advised Jews to stay away. But they didn’t keep away. Side by side with the other East enders they built barricades, women threw the contents of chamber pots on to the heads of policemen and children hurled marbles under their horses and burst bags of pepper in front of their noses.

Professor Bill Fishman who was 15 on the day: "There was masses of marching people. Young people, old people, all shouting 'No Pasaran' and 'One two three four five - we want Mosley, dead or alive'," he said. “Between 3pm and 3.30 we could see a big army of Blackshirts marching. They were surrounded by an even greater army of police. There was to be this great advance of the police force to get the fascists through. Suddenly, the horses' hooves were flying and the horses were falling down because the young kids were throwing marbles."

Thousands of policemen were sandwiched between the Blackshirts and the anti-fascists. The latter were well organised and through a mole learned that the chief of police had told Mosley that his passage into the East End could be made through Cable Street.

"I heard this loudspeaker say 'They are going to Cable Street'," said Prof Fishman. "Suddenly a barricade was erected there and they put an old lorry in the middle of the road and old mattresses. The people up the top of the flats, mainly Irish Catholic women, were throwing rubbish on to the police. We were all side by side. I was moved to tears to see bearded Jews and Irish Catholic dockers standing up to stop Mosley. I shall never forget that as long as I live, how working-class people could get together to oppose the evil of racism."

Max Levitas, now 91, was a message runner at the time: "I feel proud that I played a major part in stopping Mosley…They did not pass. It was a victory for ordinary people against racism and anti-Semitism. The Battle of Cable Street is a history lesson for us all. People as people must get together and stop racism and anti-Semitism so people can lead an ordinary life and develop their own ideas and religions." 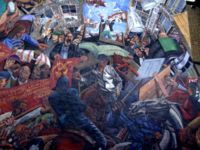 A mural commemorating the Battle of Cable Street

Some may regard this portrayal of the Battle of Cable Street as romanticising a riot. It also ignores that there was also fair degree of support for the BUF in the East end. Perhaps it is to some extent but I wholeheartedly endorse the sentiments of both Professor Fishman and Mr Levitas. Living as we do in a vibrant and relatively inclusive society, racism and anti Semitism may not be quite so overt as they once were but there is still plenty of it around.

The East end’s Jewish community has declined considerably over the years, having been replaced to a great extent by Muslim Bengalis; they are now main targets for racist abise (and have been since well before 9/11 etc) . The BUF is long gone but in recent years we have seen a rise in support for the British National Party. The targets change somewhat, the names change but it is clear that the fight is far from over.


According to the East End Advertiser , there will be a commemoration day on Sunday October 8 with a procession, street theatre, music, singers and an exhibition of photographs from 1936, as well as stalls and other festivities.

What Next Journal (a Marxist perspective but worth reading)

For what it's worth, the battle of Cable street from a BUF supporting perspective
Posted by jams o donnell at 11:10 am

i wish that the folks here would start marching in the streets to stop the regime that is holding our country hostage. i fear that the fascists will win this round.

Bad as he seems Bush is not a fascist. Again even if it can seem that the Repubs and Dems appear to be two wings of the same party there is a chance of putting the republicans to teh electoral sword soon.

Thanks for that peace of history, Jams. I know you don't read him, but Pratchett used bits of Cable Street in one of his books [Night Watch] and this brings the whole thing into better focus for someone on the left side of the Pond.

Actually, I do know the difference between peace and piece, so I'll blame the misspelling on Dot laying across my wrists at the moment.

jams o donnell said...
This comment has been removed by a blog administrator.
12:12 am

Excellent... I am glad he used it in his book. In my view it really does show what people can do to confront evil successfull without flying a plane into a building

Maybe, but the real heir of Mosley and the BUF is George Galloway. Their anti-semitic rhetoric is virtually identical...

The BNP are the heirs to Moeley's BUF. Track through the factions and the splits on the extreme right and there is the link. Galloway, unfortunately is the MP for the area so I daresay he will muscle in on the commemoration. I hope he gets told to fuck off in no uncertain terms.