Robyn’s new album Ole Tarantula finally hits the stores on Monday. Usually he ignored by large sections of the music press so it was good to see this review in yesterday’s Independent 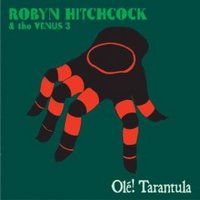 Robyn Hitchcock sounds more than ever like his hero Syd Barrett on this latest album, recorded in Seattle with his chums Peter Buck and the R.E.M. auxiliary of bassist Scott McCaughey and drummer Bill Rieflin. Indeed, the opening psych-rock wig-out "Adventure Rocket Ship" sounds like the Floyd might have if Syd had written the space-rock songs rather than Roger Waters. The rising melodic hook of "Red Locust Frenzy" recalls Tim Buckley; and the warm horns on "Museum Of Sex" have an engaging Memphis soul character - all of which illustrates the problem Hitchcock has in transcending his influences. But there is recompense here in the poppy, epiphanic "'Cause It's Love (Saint Parallelogram)", which may yet furnish him with the hit he deserves.

The reviewer gives if 3 stars (our of five) - to a fan this would translate to at least eight stars! I have heard a couple of the songs played live (Adventure Rocket Ship and a Man’s Gotta Know his Limitations, Briggs and of course Ole Tranatula itself) and if they are representative of the album as a whole then I will be a happy camper!
Posted by jams o donnell at 8:48 am

I like the cover art. Particularly because the spider legs look like funky cabaret dancer legs. I don't know too much about Robyn except that he's collaborated with a lot of big name people, including one of my favorites, Grant Lee Buffalo(Phillips).

Undoubtedly, you'll be featuring some of this new work here, and then I'll have a listen for myself.

Oh he has collaborated heavily with Grant Lee Phillips.. (I thought the Shining Hour off Fuzzy could have been written by Robyn) There is a DVD out there called Elixirs and Remedies which features them playing their songs together. I must track down a copy sometime.

Some people on the Robyn Yahoo groups ahve already got the album and the feedback is pretty good. I am very much looking forward to getting my copy!