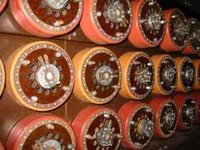 The Turing bombe
The BBC is carrying a story concerning the recreation of the Turing Bombe a machine that was used to decipher German messages during WWII. This will be the first tine a bombe (operational or not) will have been seen since the end of the war - Churchill ordered their destruction to ensure they did not fall into the wrong hands.

The replica will be shown at Bletchley Park in Bucks, the site of “Station X” where the original codes were cracked from next July. About 10,000 people worked at Bletchley Park at the height of the war - mostly from the Women's Royal Naval Service. One former employee was 82-year-old Jean Valentine, who described how the original machines "worked beautifully" and sounded like "lots of knitting machines". She said all of the employees at the code-breaking station worked on a "need to know basis. I knew what I was doing but I didn't know what anyone else was doing."

Alan Turing
The code-breaking machine - known as the Turing Bombe - was developed by the mathematicians Alan Turing and Gordon Welchman based on an earlier effective machine designed and used to great effect by Polish intelligence before WWII. It is thought the intercepted messages helped the Allies to defeat the Nazis in several crucial battles - so shortening the war by as much as two years. Simon Greenish, director of Bletchley Park Trust, said the war-time facility was "one of the 20th Century's great stories. What was done at Bletchley has affected all our lives in one way or another because World War II would not have ended when it did if it wasn't for Bletchley”

The reconstruction project will be open to the public from July 2007.

Marian Rejewski
Wwe will never know if the war would have lasted until 1947 without the contribution of the men and women of Station X. What is certain: they men and women of Station X would not have been possible without the work of Polish Intelligence before WWII. Mathematicians like Marian Rejewski had cracked an earlier version of Enigma and if it wasn’t for their “bomba” then there probably would have been no Turing Bombe. This does not take anything away from Alan Turing. It merely shows that few things are created from first principles, rather inventors generally take forward and improve on what is already in existence.

Sixty "enthusiasts"? All they really needed was Tatjana van Vark. I'm only half-joking; she's done some incredible reconstructions of old technology, including the Enigma-inspired machine depicted at the link.

Cryptonomicon, here we come. I wish I were close enough to see the exhibit. If you go, please enjoy it in my behalf as well, jams.

Wow her work is amazing! I love it, I am looking forward to going up to Bletchley Park. It's about 100 miles away so we'll make a long day of it.

Jams,
I had read bits about Bletchley and Turin, but did not realize the Polish connexion. This is fascinating. Poland has a history of great mathematical and scientific minds, from Copernicus to Madame Curie (nee Sklodovky, if I recall correctly). Thanks for this interesting post.