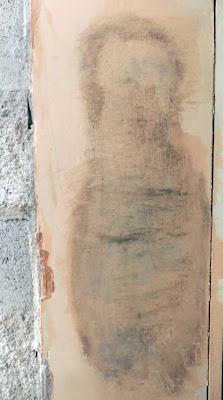 A Cornish couple decorating their home were shocked to find that an image of the baby Jesus appeared on their wallpaper. Sheila and Richard Woolhouse were stripping old wallpaper from their kitchen when they spotted it.

The damp marking appears to show a baby wrapped in linen Mrs Woodhouse said that the image looked like the baby Messiah. ”It’s spooky – it looks like the baby Jesus. They way it looks like a child wrapped in swaddling – it really has got religious connotations. The more you look at it, the more real it becomes. A few of the neighbours and friends have been round and they have been surprised by it as well.”

Well, err, maybe.. Hmm I suppose it’s refreshing to see Jesus as a baby instead of sporting a beard....
Posted by jams o donnell at 9:26 pm

Wow. That's the biggest stretch of a simulacram I've seen in ages.

How do they know it looks like baby Jesus. Were they introduced, lol.

He seems to have a full head of hair though!!

ehaps they are better connected Alison!

Well he WAS jesus Cherie!

Looks far more like a Russian doll to me than anything remotely religious...

As the Sex Pistols famously sang, 'I don't wanna baby that looks like that.'

NOw you mention in Gledwood, You're right!

It looks like a copy of some medieval painting to me.

It looks to me like one of those weebles that you can't knock over ...

It does doesn't it SE

Haqha Liz, I never thought of that!