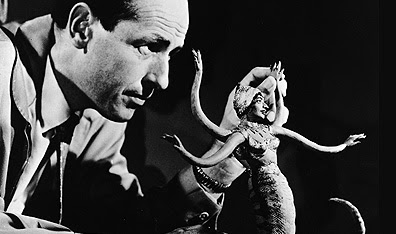 Even in the age of amazing CGI effects there is nothing like watching the stop motion work of Ray Harryhausen in films such as the 7th Voyage of Sinbad and Jason and the Argonauts. It was therefore with real pleasure to read in today’s Guardian that the National Media museum in Bradford (NMM) is seeking to acquire his archives.

The museum is working with the Ray and Diana Harryhausen foundation to create a permanent home for a collection of drawings, storyboards and models relating to many fantasy monster films generations of children (like me) grew up with

Harryhausen turns 90 today and the NMM, based in Bradford, will unveil plans for a fundraising campaign to acquire his archive. A spokeswoman said it was too early to say how much will have to be raised. Harryhausen said the foundation wanted to ensure that his collection of more than 20,000 items and several hundred models was seen by as wide an audience as possible.

"Now I have reached 90 it is important, certainly in my profession which does not have a reputation for looking after cinematic artefacts, to preserve my art in all its forms available for future generations," he said.

To mark his birthday, tributes were made to Harryhausen over the weekend at an event in London organised by Bafta and the British Film Institute, hosted by the director John Landis. The London Film Museum opened a year-long exhibition devoted to Harryhausen and his films today.

Here’s wishing Ray a very happy birthday and a hope that his archive will be displayed here in the UK in the not too distant future. I know I will make a pilgrimage to Bradford to see it!
Posted by jams o donnell at 12:52 pm

I rally hope it happens Cherie.

Too bad someone doesn't take that figurine and do a spoof commercial about underarm deodorant.