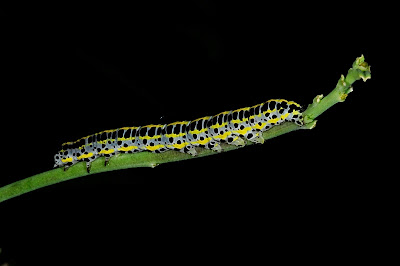 I am the caterpillar of Calophasia lunula, commonly known as the toadflax brocade moth. Jams and the not-wife were kind enough to plant some yellow toadflax in their front garden. I find this and other linaria species utterly delicious.

"resident species restricted to the south-east and central southern coasts of England, where it frequents mainly shingle beaches.

It is a relatively recent colonist, arriving around 1950 and quickly gaining a foothold, but appears to be now in decline again.


According to the UK Biodiversity Action Plan the moth has declined recently and is seldom reported away from Dungeness.

It has been recorded from almost every country in Europe, from the Mediterranean to southern Norway. Its range extends through Asia Minor east to the Amur and Ussuri regions. It is an established introduction in North America. However, in the UK it is classified as Rare.

Its larvae chiefly occur on yellow toadflax Linaria vulgaris, but also on other Linaria spp and on small toadflax Chaenorhinum minus. 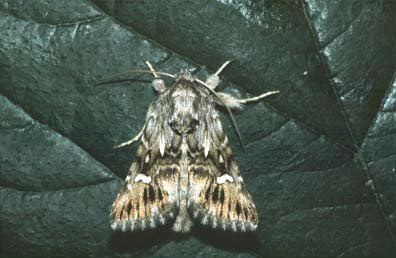 We are both delighted to find the caterpillars in our front garden, especially are they are not exactly common. Hopefully we will see the brocade moth itself as we have red valerian in the front garden too,

The photo of the moth and its distribution map are from UK Moths
Posted by jams o donnell at 5:22 pm

I have not heard of one of those before. I hope you get to see moth too.

I hadn't till today either! I really hope we get to see some of the moths

I think it's wonderful that you have such an uncommon caterpillar in your garden! And what a fancy name: toadflax brocade moth, ooh! A very handsome moth indeed, and the caterpillar is stunning.

WOW! I'm envious. If you're born with those colours, you need to wear no clothes. And you know you'll turn out into someone even more beautiful.

Nothing as common as slugs for you, Jams. :)

We are so pleased to have a rare caterpillar in the garden. With the Red valerian we have a chance of seeing the moth too

Ah Calum the slugs are there, providing the background, Their time will come!