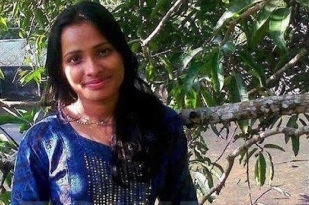 I missed this at the weekend but the young Indian woman who was the victim of a horrific rape in India last December has finally been named. The People identified her as Jyoti Singh Pandey after her father gave his permission for her to be named.

Her father Badri said  “We want the world to know her real name.My daughter didn’t do anything wrong, she died while protecting herself.I am proud of her. Revealing her name will give courage to other women who have survived these attacks. They will find strength from my daughter.”


He said: “The people of India have given us strength to cope up with our loss. I feel she’s not just my daughter but also India’s daughter. I used to read about rape incidents in the newspapers but never digested it much. We’re so thankful to the people who came out to protest against the barbarity.”
DNA tests have linked five men and a 17-year-old from the bus with rape and murder.. The 17-year-old will be tried separately as a juvenile.

Badri now hopes mothers and fathers will teach their sons to respect women. He said: “The police cannot handle this on their own. But parents need to keep an eye on their children too.”
Indian law prohibits naming a rape victim unless she authorises it or, if she is dead, her family agrees to it.

Sadly Jyoti joins the likes of Neda and Meena as dead icons.  Her death was appalling.One can only hope that some change comes fro it

This is so sad. Poor Jyoti. I commend her parents for allowing her picture and name to be released.
This way, seeing her face, knowing her name, she 'becomes' human and not just a statistic.
I can hardly imagine the terror and pain she must have felt.
Six men? Six cowardly murdering thugs, including the 17 year old.

"The police cannot handle this on their own."

That's a joke. If what I have read in serious media outlets is even half true the police are among the worst actual perpetrators, and also play a major role in refusing to act on attacks even when it is not actually them doing the attacking.

I hope the publicity of this issue and the fact that the her father allowed the victim to be named will be as start to changes of attitude and behavior.

More people will need to speak out before those changes will make a difference.

Releasing Jyoti's name was the right thing to do. Will it help bring change.I would like to think so.Will it actually bring change? That's another matter

Women in India do the right thing by demanding better law enforcement and protection. Safety shouldn't be something affordable only to rich daughters and wives surrounded by bodyguards. The state should provide for their safety and respect their integrity. I feel terrible about what happened to Jyoti but worse that rape is commonplace in India.

What a beautiful girl and a horrific loss of life.

Indeed it is Liz