Staurday Photo Hunt - Fake (or how my cats see themselves) 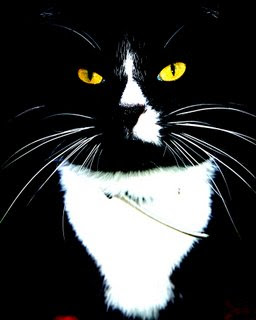 Ted wants to be top cat so he sees himself as a an almost imperial figure. Robyn the alpha cat sees things otherwise!

In her head Mimi is a creature of the night!

Scroll down for a pic of our fourth cat Bebe. She is an angel and she knows it.

Fake is the theme of this week's Photo Hunt. I know these photos may is a bit tenuous but my cats' images of themselves are utterly false, to the point of being fake!
Posted by jams o donnell at 12:04 am

those are such great shots!! I love the last one the best--great color!! Great "fake", Jams.

Hehehe this is a great idea for the theme! Have a goodly weekend!

Very good idea, I like your creature of the night best although they are all beautiful.

These are awesome pictures... almost beautiful and magical in a sense... love 'em!

great idea, and love the photo editing! :)
enjoy your weekend!

I love your creative take on the theme. It's nice how each cat is unique and special in its own way.

your entry is funny. i hope i don't mirror that hallunication...hahaha. great take on the theme.

How funny! These are all such great photos and awesome choices for this weeks theme.

LOL...cute journaling with the photos to make us smile.

These photos are teriffic for his weeks theme! Great job with the cats personalities! My photo is up please visit soon

Lovely cats! It must be fun to have several and see how they interact. Ours thinks he's a great hunter ....

Very creative take on the theme! they look so dangerous the pics have to be fake, lol
Happy hunting and happy weekend!

have a great weekend!

What great shots! Great take on the "fake" theme.

Very novel idea. Reading the comments I get the idea your photos are edited: if they are, I was fooled!

LOL...I like your ideas behind the theme this week.

How clever. Boy, I had a tough time coming up with something fake. Y'all seem to make it look so easy for the theme.

I love your photos! Especially Mimi. But I think Mimi really is a creature of the night!

lovely photos! have a good weekend

Thanks for the good laugh!

You want fake? Next time I'll send you some pictures of my many mini-infidels faking illness and injury to get out of work. They've gotten surprisingly good at it.

I still love Ted the best! Even if he is a wanna be Imperial Ruler!

Great photos, and very creative! Have a great Saturday!

Clever and funny take on the "fake" theme! Cats definitely have their own ideas about who they really are. Great twist on The Hunt! Thanks for dropping by for a visit and have a great weekend.

Great photos and a terrific interpretation of the theme!

Great job on the photo hunt. Photos are fantastic.

I think we all like to see photos of cats so if you have to stretch it a bit to fit the theme, who cares?

THanks all, LOL ewbl, I bet your sixsome try just about every trick!

That middle cat could double as a vampire! Wouldn't want to meet her in a dark alley.... no sir!

My Mr. Rhett wouldn't like it either... he is a fraidy cat!

Your photos are all pretty! I loved the last one. Quite scary though but I loved it!

Meow! I like that middle photo, best!! Great pix!