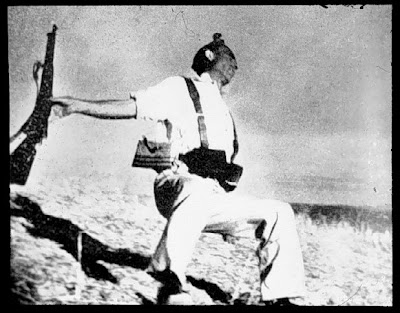 It’s enormous importance aside it was hoped that the discovery would settle the one question that has dogged Capa's legacy: was 'The Falling Soldier,' staged? I was therefore interested to see in today’s Independent that an exhibition at the Barbican in London aims to have the last word on the matter. It will show for the first time in the UK every image taken by Capa the same day.

The Falling Soldier, officially known as Death of a Loyalist Militiaman, made 22-year-old Capa's reputation but for years arguments have raged as to whether he set up the picture or whether he had in fact captured a soldier meeting his violent death. An audit of all the negatives held by the International Center of Photography in New York has turned up previously unknown film taken by both Capa and his lover Gerda Taro the same day the Falling Soldier was photographed including other images of the soldier, Federico Borrell Garcia, a 24-year-old textile worker. The new material shows, the curators believe, that Garcia was shot, but not in the heat of battle. They believe that a re-enactment of events at the front line near Cordoba attracted enemy interest.

The new images were researched by Capa's biographer Richard Whelan. After Mr Whelan's death last May, his work was taken over by Cynthia Young, who curated the exhibition. "There are new photographs. They had been lying in the archive for years. Richard was going through all the pre-1939 images and all of these early negatives and contact sheets were in a mess. They were misdated over years. But he recognised these as being taken on the day of the Falling Soldier. No one knew that these negatives existed. It was assumed they had all gone missing. There were 35mm prints taken from Capa's Leica and Rolleiflex negatives, the camera used by Gerda Taro, which proves beyond doubt for the first time that she was with him on that day.

"There have been various theories about whether the soldier was actually shot in battle. Looking at the photos it is clear that it is not the heat of battle. It is likely the soldiers were carrying out an exercise either for Capa or themselves. The images are ordered according to the numbers on the back of the negatives, so it's the best sequence we can put together and from that we can deduce the story."

There is no doubt the soldier was shot, however. Mr Whelan believed Garcia died almost instantly from a bullet to the heart.

So it now seems that the Falling Soldier was indeed genuine. That it was taken during a re-enactment is of no consequence – we are looking at the days before embedded journalists and the like. The Falling Soldier is an iconic image and will remain so. The exhibition is in my diary as a must-see event.

This sort of thing can set a person up for life.

It certainly can James!