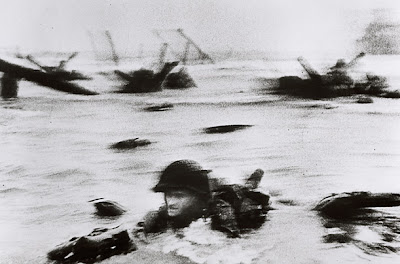 An article in yesterday’s Observer will have more than piqued the interest of photographers (from the top professionals to rank amateurs like me) worldwide. A lost treasure trove containing thousands of negatives by Robert Capa, has been recovered. Quite rightly hailed as the as the 'holy grail' of photojournalism, the discovery of the long-mourned cache of photographs after almost 70 years has sent shockwaves through the photography world.

'This is the formative work of a photographer who, in a century defined by warfare, played a pivotal role in defining how war was seen, bringing its horrors nearer than ever,' said Brian Wallis, chief curator at the International Centre of Photography in midtown Manhattan, which was founded by Robert Capa's brother, Cornell.

The discovery of the pictures is being hailed as a huge event, partly because it is hoped that the negatives could settle once and for all the question that has dogged Capa's legacy: whether what may be his most famous picture - and one of the most famous war photographs of all time - was staged. Known as 'The Falling Soldier,' the sequence of photographs shows a Spanish Republican militiaman reeling backwards at what appears to be the instant a bullet strikes his chest or head, on a hillside near Córdoba in 1936. When the picture was first published in the French magazine Vu, it created a sensation and helped crystallise support for the Republican cause. 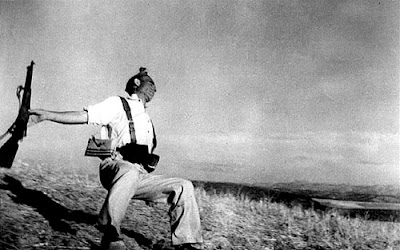 Doubts about the authenticity of the sequence emerged after Phillip Knightley pointed out in his book, The First Casualty, that at the moment of death the soldier was still clutching his rifle. Knightly also argued that a companion photograph, apparently showing the same soldier lying on the ground, proved the photograph was staged. Richard Whelan, Capa's biographer, later made a persuasive case that the photograph was not faked but doubts have persisted. A negative of the shot has never been found and the discovery of one could end the debate.

The lost negatives were photographs that Capa took during the Spanish Civil War. They were left behind in a Paris darkroom after the photographer fled Europe for America in 1939. He assumed they were lost during the Nazi invasion and he died in 1954, on assignment in Vietnam, still believing that to be the case. Then, in 1995, Jerald R Green, a professor at Queens College, part of the City University of New York, received a letter from a Mexico City film-maker saying he had inherited three suitcases of negatives from his aunt and had identified the contents as Capa's masterpieces. Last week, after years of negotiations over where they should be kept, the legal title to the negatives was transferred by the film-maker, who has asked to remain anonymous, to the Capa estate.

'The full story of how the negatives made their way to Mexico might never be known but Capa apparently asked his darkroom manager, a Hungarian photographer named Imre Weisz, to save his negatives in 1939 or 1940, when Capa was in New York and feared his work would be destroyed,' said Wallis.

It's amazing that the negs survived.

I look forward to them being printed and exhibited.

It's a bit like Howard Carter and the Tutenkhamun tomb, Sean

Don't laugh, Jams. Somehow I do appreciate this find even more.

It is a stupendous find, Sean

It is a significant find.

I find the claim that the soldier is "clutching" his rifle to be at odds with the photograph which clearly shows he only has contact with the tips of his fingers and is obviously falling backwards.

Capa was a photo journalist par excellence but journalists have staged shots for effect (unfolding the soviet flag over the Reichstag, The cannon balls after the Charge of the Light Brigade) since not long after the medium was invented!

As a result the finger of suspicion tends to point at shots that are considered too good to be true. Here's hoping the negs silence the doubters

Yes, it is a great find.