Stanislav Petrov - the man who saved the world 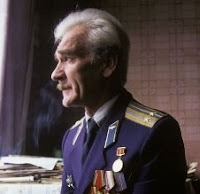 There are few people who can say that they have saved the world but Stanislav Petrov is one of them. 25 years ago today a calm and collected Petrov ensured that large swathes of our planet were not turned into radioactive dust. The following is taken form an article in the First Post

When Lt Col Stanislav Petrov arrived to work at the secret command bunker near Moscow from which the Soviet Union's early warning satellites were monitored, he was anticipating another routine stint. But shortly after midnight on September 26, 1983, alarms started blaring and a red button on the console in front of Petrov began to flash the single word: "Start". This signified that an American ballistic missile had been launched and was heading towards the USSR: then the computers linked to the satellites reported that four more missiles were on the way.

As commander of the bunker, Petrov was responsible for deciding whether the data was accurate. If it was, standing orders required immediate notification of the Soviet high command, which would then consult the Kremlin about initiating a swift and massive retaliatory strike against the US. After five minutes of frantic activity Petrov concluded that the incoming launch reports were almost certainly false. In his judgment, nobody would carry out a first strike with just five missiles: he was also aware the system had a history of malfunctioning. "My gut feeling was that we were experiencing another systems failure, so I made the decision to report a false alarm."

Petrov's hunch was subsequently confirmed by an official investigation: the satellite alerts that might have created a holocaust were triggered by an unusual combination of sunlight and high-altitude cloud formations, wrongly interpreted by the computers as a missile launch. Although Petrov's conduct initially drew high praise an official investigation later accused him of serious disciplinary offences. Petrov was formally reprimanded, demoted and shuffled into a much less responsible post

It was not until the late-1990s that the story of that dramatic night in the bunker became public knowledge in Russia. An American expert on Soviet defence doctrines during the Cold War described the incident as "the closest we've come to an accidental nuclear conflict". By then, Petrov was surviving on a meagre military pension in a squalid apartment block in a town near Moscow, drinking too much and mourning the death of his devoted wife from cancer. He would tell Western journalists that he did not consider himself a hero, just a conscientious officer who did his duty at a moment of great peril for mankind.

In my view Petrov is a hero. If it were not for Petrov many of us would have been living Threads in 1983 and not watching it the following year. A less composed commander may well have concluded that it was not a glitch but a real nuclear attack. The Soviet high command and leadership were convinced that the USA planned a pre-emptive strike on the USSR and would not have hesitated in launching a retaliatory strike which would have devastated North America and Western Europe. East/west tensions were even higher than usual – not least because KAL007 had been shot down less than four weeks before and the Able Archer nuclear exercise was set to take place just over a month later.

Thanks for this information - I wasn't aware of it. On that day my fourth child was just 7 weeks old. I'm very grateful to Stanislav Petrov.

And there was me thinking he was a football player.

Perhaps he can socre as well as save!

What an interesting man. And a bonus that he looks like Omar Sharif too.

One of the most interesting ones in a long time.

A very interesting post. A hero indeed and very humble he seems too.

GLad you found this item interesting

A very interesting account of what was happening at the height of the Cold War - makes you shudder to think about it ..

It certainly does Petrus.

Wow, I've never heard of Petrov but his name sure fit him... steady as a rock, not prone to hasty conclusions. Good one Jams!

Petrov, peter, rock.. I didn't think of that Philos. Thanks!

a pity--i'd never even heard of the man. he deserves a huge pension funded by every country in the world.

Agreed. He deserves it!

A little bit of heaven fell from out the sky one day
It landed in Vermont, North-Eastern USA
The General at the radar screeen, he rubbed his hands with glee
And grinning pressed the button that started World War Three.