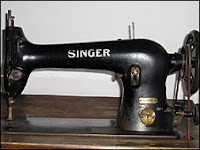 Although it’s highly debatable if it even exists red mercury is a conspiracy theorist’s wet dream. Not only does it (allegedly) allow the creation of a fusion bomb without the need of a fission bomb, it can be used as a paint to create stealth aircraft, find treasure and ward off evil spirits.

The BBC reports that Saudi police are investigating a hoax that has seen people rushing to buy of all things old-fashioned Singer sewing machines for up to $50,000 following rumours that they contain traces of red mercury.

According to the Saudi Gazette trade in the sewing machines has been brisk across the country. Several tailors shops have had their machines stolen. People have been holding mobile phones up to the machines, believing that they could be used to detect the presence of red mercury.

An interior ministry spokesman said authorities were trying to discover who had spread the rumours. "We have to find out who started this hoax. People hope to make profit," he said. "This is no different to cases of citizens who put their money in untrustworthy schemes."

We were given an old Singer sewing machine some time ago. It’s currently out in the shed but now that I know it contains red mercury I think I’ll create a weapon of unimaginable destruction and hold the northern hemisphere to ransom.. I will do as soon as I think up of a good Bond villain name and practice phrases like “No Mr Bond I expect you to die”. Then the world will be min ALL MINE MWUHAHAHAHAHA
Posted by jams o donnell at 7:16 pm

Conspiracy theories aside, I find it disturbung - to put it mildly - that the bankrupt Lehman Bank's assets list 500,000 pounds of Yellow Cake.

Man, that's enough to build a working nuke! Or keep a civil reactor running for a year.

Well I know where you can get your hands on some more! My Dad uses one to prop the garage door open with LOL

My mother has an old Singer sewing Machine.

Anyone reading this post and comment, please be advised that I am willing to sell the sewing machine for $50,000 and I will include free delivery.
:)

LOL! My parents have a really old singer machine left over from my grandmother... :) :) What do I do with it now???

Yellow cake Stu? Bloody hell. I think we can rule out a stockpile of Madeira cake!

Ardent why sell. How about you, ne and Cherie form our own axis of evil Mwuahahahaha!

First you have to get a long-haired white cat. Ted may be evil, but to rule the world you need a white Persian.

My grandmother had one that was originally powered by a foot treadle, and then they bought the motor kit and installed it.

It came in a case that allowed you to store the sewing head inside and use it as a table.

I'm holding out for the Philosopher's Stone, which is pretty rare in Florida [actually we don't have any stones in Florida, just quartz sand where I am].

How could the world be so careless as to let such a machine end up in the hands of someone as ruthless as you? :)

Problem solved Bryan, I've dyed Robyn's hair white (an evil act in itself!). Now I am ready for world domination! I just need a base and a few hundred loyal but expendable bodyguards, and a suitably named scientist to kidnap. Philosopher's stone? better that than a kidney stone!

I've got a sewing machine that's older then the Singer ones! Does that make the mercury more or less likely? Now where did I put my mobile?

It might just Welshcakes.. just don't set up your fortress of doom in Mt Etna!

Steve Bates said...
This comment has been removed by the author.
11:33 pm

Red mercury sounds like a hoax to me. First you have to believe in old Singer sewing machines...

Haha Steve I think there will be nice men with baseball bats just waiting to give you a sun kissed welcome to Florida!

WEll that's true. THere is no real evidence for the existence of Singer machines!

Totally true. I use the red mercury against gnats. And to spice my oatmeal.

On your oatmeal Snoopy? You are a hardcore lot in Israel!