The oldest satellite in orbit 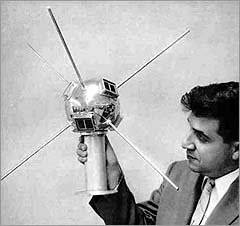 Vanguard I is the oldest surviving man-made satellite in space and is about to celebrate 50 years in orbit. It will have made nearly 197,000 orbits of teh earth when it reaches its 50th anniversary on Monday.

At 6in in diameter and 3lb in weight, it was dubbed “the grapefruit satellite” by Nikita Khrushchev, then the leader of the Soviet Union. It is tiny by modern standards, and even small compared to the 23in-long Sputnik 1, its achievements were enormous. It was the first to use solar power and it sent back a wealth of information on the size of the Earth, its air density and temperatures. After the humiliation of watching the Soviet Union get satellites into space first, its successful launch and deployment came as a welcome fillip to the United States and the West.

President Dwight Eisenhower publicly announced its deployment a little more than two hours after the launch and it was reported in The Times on March 18, 1958, under a headline: “Up ‘for a very long time’.” The satellite has travelled 5.7 billion miles, the equivalent of flying from here to Neptune and back, plus a round trip to Mars. It was the second successful satellite launched by the United States but it has remained in orbit longer than any of its predecessors, all of which burnt up when they reentered the Earth’s atmosphere.

It was the second satellite launched by the USA. The first was Explorer I which was launched the month before. At the time of its launch, Vanguard I was reported to be capable of staying in orbit for five or ten years, though it later became clear that it was designed to last for 200 years. More recent analysis suggests it will continue circling the Earth for 2,000 years unless it is knocked off course. It was launched by the US Naval Research Laboratory (NRL) from Cape Canaveral in Florida as part of Project Vanguard, headed by John Hagan.

Much of the technology for the project was based on Germany’s war-time V-2 rockets. One of the satellite’s most important achievements was to test solar cells in space, allowing space-craft using them to continue much longer in orbit than those with conventional batteries. While other satellites ran out of power after about three weeks, Vanguard I’s solar power enabled it to continue transmitting information back to Earth for seven years. It finally stopped broadcasting in 1964.

They sure built ‘em to last in those days!

I didn't know it was still up there! Btw, jams, I was over here Thurs [after blogger outage] and it just wouldn't let me leave comments. So please don't think I've been neglecting your blog.

No worries Welshcakes! It amazed me to find out too

That's amazing, it's so small and to think of it plodding along up there all this time.

I can identify with the plodding Liz!

This is very interesting, Jams! First, I didn't know there was a satellite that small... and who would've thought it would still be in orbit!

And, I loved your last sentence. That goes for cars, too. LOL.

I can't speak for 50s cars but teh not-wifes brother has a 1966 GTO in beautiful condition.

My own 1990 Corrolla is still going strong but perhaps a bit young ti be an example!