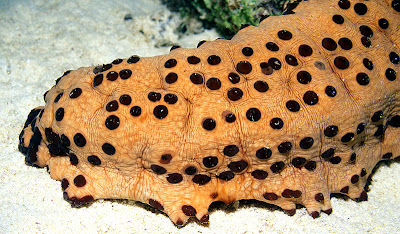 Not only does the sea cucumber have potential medical applications, it has also been immortalised in music and poetry.

In 2003 academic Robin Gill produced a 480 page book called Rise Ye Sea Slugs which brings together (possibly for the first time in English) around 1,000 haikus on the subject of our holothurian hero. Apparently they have been the subject of the Japanese poetry form for centuries this including this one from 1690:

This sea slug
is it too beastly for
proper monks?

(Taken from Danny Yee’s review of the book here). Wonderful stuff. I feel a purchase coming on!

More famous of course is Erik Satie’s composition Embryons desseches. The first movement is called holothurie and concentrates on the so-called purring of the holothurians (????). In his description on the score Satie wrote: “The Holothurian crawls across boulders and rocky surfaces. This sea-animal purrs like a cat; also, it produces disgusting silky threads. Light appears to have an incommodating effect on it.”

Make of that what you will. Sadly YouTube has no footage of it being played. It’s a shame also that no artist deigned to paint this versatile beast. Albrecht Durer painted a beautiful hare. I’m sure he could have done the Sea cucumber justice too!

That's a scary looking pic of a sea cucumber there -- but have to admit that my first reaction when I saw the word "sea cucumber" was: mmmm, good to eat! (With the second involving my remembering my Chinese friend in Tanzania, the sea cucumber and fish maw trader!)

Hi sweetie! I had to comment, I had the misfortune of stepping on one of these creatures! I had no idea what that white sticky gummy crap was that we couldnt get off of me! I had a sister try, then she became covered in it...apparently it is their mechanism to defend themselves...what a mess! I didnt even know these things lived! lol

Ah I take it that there's good eating on a sea cucumber YTSL?

Ach Powestwin, that sounds yucky. From the anuimal's point of view it's pretty effective though!

Oh sea cucumber,
I see you under
The waves and wonder
Why they call you
Sea Cucumber.
Was it a blunder?
How I wonder
Does it make you blue?

Bravo Guru! I think there is call for more sea cumber poetry in English. You may have started a new art form!

What a fascinating creature!

It certainly is and certainly deservees more music and poetry!

it's a bit late now. i'm going to have come back and read this properly!

Interesting series, you saved the best for last. We need a Robert Bateman for sea creatures.
480 pages of Haiku of sea slugs. I love it.

It's a wonderful thought jmb. Hey I've just thought of my first haiku!

Maybe sea cucumbers are poised to take over the spot as celebrity pets? Celebs will soon dispense of their silly purses that double as miniature dog carriers and instead buy portable aquariums to show off their manicured and foofily dressed sea cucumbers to the paparazzi.

Haha EWBL. I can just see Paris Hilton with one!

Me, an academic?! Thank you, I guess!

Is that an ear-trumpet? If so, I hope you have some choice quotes from Carrington;s masterpiece somewhere on the site.

Haven't checked the pound price of my book recently -- if the dollar fell enough I may just be subsidizing my book in the UK -- hard to do with an income of less than 1000$/year.

Please look for my next book in a month or two. Mad In Translation.1,500+ kyouka, the b-side of waka.

I just found this post online and thought I'd give you the link to my Sea Cucumber poem on my funny poetry blog.
I wrote it last year after a snorkelling trip with a marine biologist in the Ionian.

His graphic description of the tragic lifecycle of the sea cucumber moved me to verse. You have to laugh or you'd cry.
Hope you like it.

Hi I just found your post by accident. I am a zoologist with an undesribed passion and unfulfilled love to Sea Cucumbers. Liked your posts but thought I would mention one thing: The book you recommended above has a very confusing title. Sea slugs are molluscs (cousins of snails and octopi) and cucumbers are echinoderms (cousins of starfish and sea urchins), also possibly very old ancestors of Chordates (which humans belong to)... :)
Ok, that's all I had to say.
All the best! x

Hania, I hope nominal sensitivities will not scare you from my book. I consulted Dr Alexander Kerr who did the Web of life section on sea cucumbers and in Vladivostok, Russian echinodermologist Dr Igor Dolmatov enjoyed the book and sent me his and Dr Chantal Conand in France announced it in a well known trepang-trade-related bulletin, etc.. The reason i used sea slug more than sea cucumber was mostly to keep the japanese original's metaphorical sense intact and because haiku are short. Also, you may note that you are biased by professional knowledge. In my OED, trepang is the first definition for "sea slug" -- you will also find the book starts with a thorough taxing. And, just to make sure there was no confusion, i also gave a paragraph to the pretty mollusc with the nobel prize-winning brain. Cheers!

Robin I can assure you that I was not scared off and I purchased a copy.It is a treasured book!