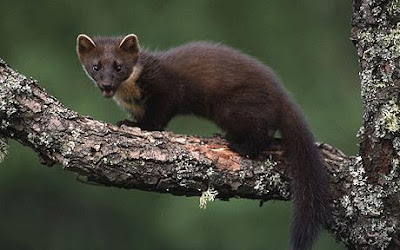 Last weekend the Telegraph reported good news for one of the country's rarest mammals. The pine marten had almost been wiped out save for a few scattered populations in Scotland.

A new report, however, reveals that the pine marten is starting to regain a foothold in parts of England and Wales.Conservation groups have reported sightings in 25 "hot spots" around the Lake District, Yorkshire, Snowdonia and even as far south as Staffordshire.Experts using DNA testing have also found evidence of pine martens in the Cwm Rheidol valley, near Aberystwyth, Wales, for the first time in 50 years.

"It now looks like there is evidence of pine martens in England and Wales for the first time since they are thought to have died out (in 1994)," said zoologist Professor David MacDonald, "There are still question marks over how viable those populations are, but it is a positive result in those areas that contrasts quite starkly with how pine martens are seen in the north of Scotland.They are relatively widespread there, but are not universally welcomed as the game keeping fraternity regard them as pests that prey upon pheasants and capercaillie."

Pine martens were once common across much of the UK, living in predominantly wooded areas and sections of moorland where they preyed upon small rodents, birds, insects and eggs. They were heavily hunted and poisoned by landowners who feared they were damaging game bird populations.In 1988 they were given full protection under the Wildlife and Countryside Act but continued to decline and by 1994 had disappeared from England and Wales.They are now thought to be the UK's second rarest carnivore after the Scottish wildcat.

Recent research has also revealed that the creatures are widespread across much of Northern Ireland. The UK as a whole is thought to be home to more than 3,600 pine martens.It is not known whether the pine martens in England and Wales came across the border from Scotland, or were isolated populations which have managed to survive unnoticed until now.

The Forestry Commission is also attempting to capture pictures of the shy mammals on film by baiting camera traps with jam and peanut butter, a favourite treat for pine martens, which have a sweet tooth particularly over the winter months when they normally eat berries.

Brian Walker, wildlife officer at the Forestry Commission, added: "We have had some very reliable sightings by national park rangers. There is a lot to suggest they are living on the Yorkshire Moors now. Of course, the real clincher will be to get some DNA or a good photograph as we can't ask for money to conserve a species until we can prove it is really living here."

There are relatively few good news stories to go round but it's glad to end the year on one.

The countryside is important to me. I hope it all works out.I hope you have a wonderful New Year. Take care.

Pine Martens do indeed have a fondness for jam, as I discovered on a holiday in Ardnamurchan about 20 years ago.

At dusk every evening a Pine Marten would appear on the doorstep of our cottage, looking for food. It showed no interest in dog food or chicken scraps, but would wolf down dried fruit and pieces of toast spread with raspberry jam.

That is a hopeful story for ending what has been a difficult year on so many fronts. We hope more lost species are found, and that the world as a whole gets better next year.

That is welcome news. Pine Martins are wonderful, I had the pleasure of seeing one close up when I was in Scotland once.

That is good news indeed. Here we have the American marten, which is at risk but not threatened with extinction, and the purple martin, which has wings, lives in human-constructed bird apartments and eats mosquitoes at dusk, and of course the martinet, which... oh, just look on any American fundamentalist religious web site.

Oh, he's cute! I have seen a rare animal here once - one that looks similar called a Fisher. It is in the marten family. It is the only animal that eats porcupines! It flips them over and eats their belly! I saw one run straight up the side a tree on the edge of the woods near my old apartment. I was so excited to see an animal I had never seen before!

Thanks everyone. Roger, I love your marten shot, Steve, I hope to see no Martinets here! LB that s an a wonderful sounding creature. Happy new year everyone!

Dear Jams,
may you, the not-wife, Mimi & Co. and all martens glide smoothly into the new year, and may 2009 bring you lots of health and happiness, not to forget the inspiration for what you use to call 'drivel'.
All the best of everything, which is as everybody knows Omnium. :)

They were living in a valley just behind Fishguard forty years ago.
Indeen a Good New Year to you and yours across the generations.

Thanks ean Thanks Alison and a happy new year to you.

Here's hoping they wil be back soon Aileni