I saw the link to the US version of the Political Compass test (although it is called the Political Spectrum test). over at Tygerland. Unsurprisingly I was placed in the libertarian left - no surprise there....

My Political Views
I am a left social libertarian
Left: 5.06, Libertarian: 4.1

Any test of this sort is going to be far from perfect but at least it tries to add a dimension to the left/right split.

According to the original Political Compass test, my scores are pretty similar on the left/right split but I appear to be a bit more libertarian.. make of that what you will. 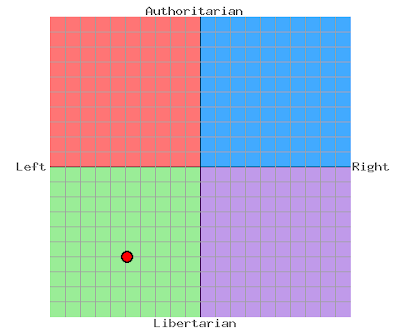 It did pass a bit of time on a wet Sunday
Posted by jams o donnell at 4:28 pm

As expected I registered slightly as a libertarian and slightly right.
I was much further to away from the center on foreign policy.

I respect sane liberals who understand the evils of Communism.
The traditional liberal understood this and sadly they are few in number.

My views are based on a simple pholosophy: "Shit that that ain't right". That beats any mountain of ideology in my view

I was round there somewhere too.

This is my result:

It's certainly a diversion Nevin!

I am definitely a pacifist and a left moderate social libertarian. There were good questions within the quiz.

It's nat a bad quiz of its type.. certainly better than working out which type of the colour blue we are!

I did the original political compass some time ago and came out in in a similar place to you.

Welcome to the left-libertarian quadrant, jams... you'll find a lot of good company there!

Beakerkin, almost no liberals today have anything to do with communism; it's rather an insult to imply that we do. But frankly, we're used to it; it reflects less on liberals than on the people who ignorantly assert the association.

It's the best place to be Steve!

I did it a couple of years ago, when the US presidential hopefuls were announcing their candidature. Iwas on the libertarian left, along with Denis Kucinich of Kuchinic or whatever he calls himself.

All the rest of them were authoritarian right, including the present incumbent.

I doubt there are ever any serioue left wing conte3nders for teh US presidency Steve!