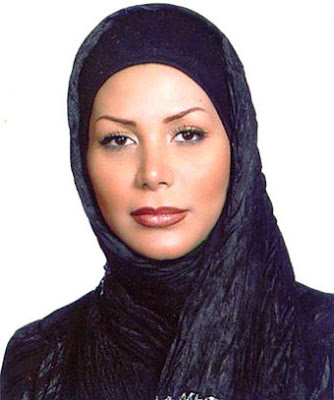 As a living Lady fills the scumbag junta of Burma with terror so in death does Neda Agha Soltan to the vermin in charge of Iran . It does not matter that her death was one of many during the protests that followed Iran’s fraudulent election last year (and those to come of course – those to be executed after show trials), in death, Neda is the icon of Iran's struggle for democracy.

That Neda terrifies Ahmadinejad and his minions is clear. If not then they would not have jammed satellite broadcasts of “For Neda”. According to today’s Independent the regime has released its own film about her death,. – which blames the resistance movement outside Iran for Neda's death. This will come as no surprise as the regime has tried to blame just about everyone but the Baseej for her murder, including the doctor who held her dying in his arms and those who shot the video footage of her death. The regime has even claimed that she was alive and well in Greece!

Despite what must have been enormous pressure Neda’s family has refused to cooperate one jot with the regime. They refused to contribute to the “official” version but did, however, co-operate with the British documentary “For Neda” that depicts her death and the impact it has had on her family, on Iran and around the world.

Neda's mother, Hajar Rostami Motlagh, spoke yesterday of the heartache and inspiration that her daughter's death has come to symbolise. Neda's death was one of many during the Iranian Green Revolution, but international coverage of her killing has left her family fearful of constant intimidation.

"It has become more difficult for us to visit Neda's grave", her mother explains. "Every time we visit, there are a couple of officers watching us from a distance. They're afraid even of her dead body... I've always been an ordinary Iranian mother, I've never been into politics... but since Neda's death, our lives have been changed. People expect us to react and participate in meetings. I have been in touch with the mothers of those protesters who've been killed after the election and participated in women's rights meetings."

Speaking about the global impact of her daughter's death, she said: "It's an honour for our family. We thank everybody in the world for paying attention to Neda's story. There have been hundreds of other Nedas in Iran who were killed after last year's election, but their stories are not so well known. I hope the world would pay attention to their stories too."
"It's too late for the government to discredit Neda's story and the film. Her moment of death is seen by the world. Every time they try to build up lies upon lies about Neda's death and they have been unsuccessful."

Oppression has not deterred Neda's family. Ms Motlagh said she was no longer afraid. "I lost my daughter; I don't have anything else to lose. I was not frightened at all. The least I can do is to let the world know what has happened to my daughter's life."

What more can one add to this? The regime’s attempt to present lies about Neda’s death will not be believed except by the regime and its sycophants, useful idiots like Galloway and Seumas Milne and other credulous fools (like Further Left?)
Posted by jams o donnell at 6:21 pm

Right behind every word, Jams.

Thanks James. The people of Iran are unlikely to believe this crap

Thanks for keeping another of those stuck behind the impenetrable wall of American coverage informed. Neda will be missed but her presence is more real than ever.

Absolutely. If she did not terify the regme then they would not try to smear her