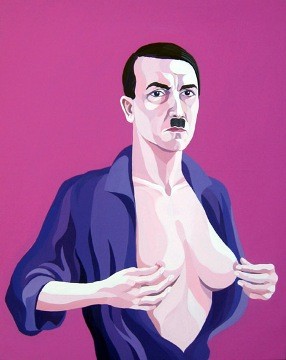 
I love the hare-brained schemes that are proposed during wartime, be it seagull sub spotters, tsunami and gay bombs. No it seems that the British security services considered a plan to bring out Hitler’s softer side by secretly adding female hormones to his food Fuhrer's food.

According to a new book Secret Weapons: Technology, Science And The Race To Win World War II by British professor Brian Ford, the idea that Hitler's violent quest for world domination could be subdued with steady doses of oestrogen was one of the strange ideas dreamt up to bring down Nazi Germany.

"There was an Allied plan that they would smuggle estrogen into Hitler's food and change his sex so he would become more feminine and less aggressive," Ford said. "Their research had showed the importance of sex hormones - they were beginning to be used in sex therapy in London,"

The agents allegedly conjured up a bevy of options to win the war that seem far-fetched now, according to Ford. Other ideas called for dumping glue on Nazi soldiers to trap them, disguising explosives in the fruit tins that Germany imported and releasing poisonous snakes on enemy lines.

Ford uncovered the scheme while looking through stacks of recently declassified files from World War II. Unsurprisingly none of these seem to have gotten off the drawing board.

I can only imagine how the world would have turned had Hitler grown breasts and spent the rest of his days admiring them in front of a mirror….

If only it was always as simple as that!

Mebby he shot himself at the end because of gender conflict then?

It was a good find Nursie!

Gender dysphoria claimed another victim in the end Snoopy!