Hitler letter to go on sale

According to today’s Telegraph a letter written by Hitler to journalist Sefton Delmer in 1931 may fetch £12,000 at a Bonhams manuscripts sale in London on March 23
In it Hitler wrote:

"I hope..that out of this crisis a new readiness will grow up in Britain to submit the past 12 years to a reappraisal. I should be happy, if as a result of this, the unhappy war-psychosis could be overcome on such a scale as to permit the realisation of the truly cordial relationship between the British and the German peoples so eagerly desired by myself and my movement.

"For I believe that the crisis now breaking in on us can only be solved by the closest political collaboration of those nations who see in the re-establishment of a natural European balance of power the first precondition to dealing with those great world problems under which Britain, too, suffers today."

In 1933, Delmer, who was stationed in Germany, secured his greatest scoop when he walked through the burned Reichstag building at Hitler's side. 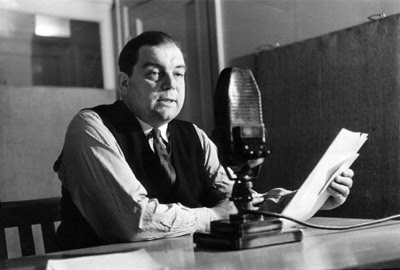 Sefton Delmer
This article gives me food for thought. The letter is interesting enough but Denis Sefton Delmer was a truly fascinating character who played an important but very murky part in Britain’s war effort, including pornography and black propaganda radio stations.

When I finally finish with Red Cushing I will do something about Delmer
Posted by jams o donnell at 8:45 am

Jams, you mention murky role and there is far more than just this letter to show it. There was downright collusion of the worst type in the upper echelons, even while sons and daughters were dying.

Fascinating, I look forward to more posts about this, Jams

In this case though James, Delmer's murkiness was in anti nazi propaganda, including pornography and black propaganda ration stations