Purrs be unto him 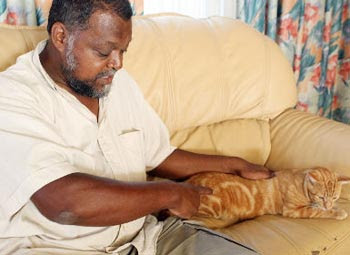 Farouk Sha is a happy man to have a cat that appears to have the word “Allah” on its side.

Osama was born a year ago with the inscription on his fur and it has become more pronounced over time.Other imprints on Osama include a moon and a star.

Talking about why the cat had been named after Osama bin Laden, Sha said some people considered the man to be a terrorist, but he was, in fact, a freedom fighter and he thought it was appropriate to name the cat after him.

Well it makes a change from appearing foodstuff...

That said, I’d no more name a cat (or any pet) in honour of that murderous fanatic bin Laden than I would Hitler though.
Posted by jams o donnell at 3:22 pm

That cat does not look to pleased.

Not very. I doubt it likes the attention

I would like to have a cat with spiritual aspiration. What it all ends with is more requests for food...

So why not Osama, after all?

I don't know about spiritual I've always had them down as demonic. More Beelzebub than angleic!