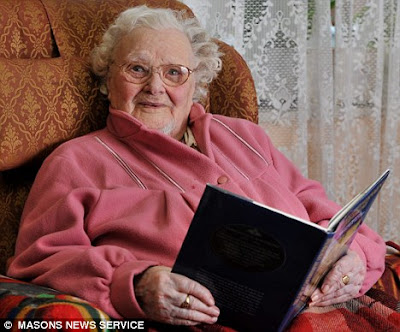 Florence Green, from King's Lynn, Norfolk, was 17 years old when she joined the Women's Royal Air Force, in the late summer of 1918. When WWI ended she was working as a waitress at RAF Marham,

Mrs Green was only identified as a surviving war veteran in 2008, when a researcher of gerontology found her service record, listed under her maiden name, Patterson, at the National Archives.

Though she never saw the front line, her service in the WRAF qualifies her for veteran status. She is now one of just two surviving Britons from the conflict. The other, Claude Stanley Choules, served in the Royal Navy and now lives in Australia. His own 110th birthday is on 3 March.

Apart from Florence Green and Claude Choules the only other , only surviving WWI veteran is American Frank Buckles who served in France as an American ambulance driver who turned 110 earlier this month.

Her’s wishing Florence a belated happy birthday and Franck Buckles an even more bleated one! It is pleasing to see that three veterans of WWI are still with us.
Posted by jams o donnell at 12:29 pm

That's rather like the answer attributed to Mark Twain when someone asked 'who wants to live to be 99?' and he answered 'someone who's 98'.

This lady looks to be in fine fettle.

Haha that's a good one Susan. The photo is a couple of years old. I hope she is still in fine shape

One of the best songs I know about WWI ... and WWI veterans.

Two Brits and an American? Surely there must be someone from the European armies still soldiering on?

To have a life with many, many memories Sphinx!

This is making me cry...The War to end all Wars!

Sadly it seems that the War to end all wars will be the one that ends our species....

It certainly is Cherie