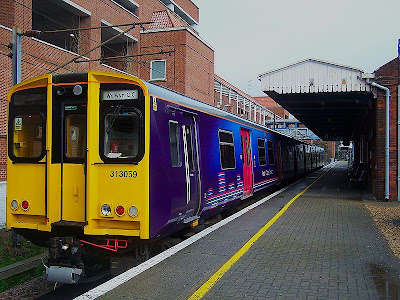 The Telegraph has reported that a pensioner caught the the scheduled 10.59 First Capital Connect service from King's Lynn to King's Cross, London. The pensioner was making her way from her home on an estate, near King's Lynn, to her pied a terre in London.

First Capital Connect said the pensioner, 84, travelled first class at the front of the four-carriage train and would have paid £47.20 - or £31.50 if she used a senior citizens' railcard. The train left on time and arrived in London at 12.32 - a minute earlier than scheduled.

Iain Duncan Smith, secretary of state for work and pensions stated "There have been a number of instances recently where pensioners have been caught spending lavishly. It is clear that pensions are too large and should be slashed forthwith"

The pensioner, who wished only to be identified as Liz W, responded to the suggestion saying "Up yours oik, I'm the Queen". Her comment was by what can only be described as an obscene gesture
Posted by jams o donnell at 4:14 pm

Silent Hunter said...
This comment has been removed by the author.
4:30 pm

A terrible mistake on my part!

I couldn't resist it Snoopy!

Glad you liked it Steve!

I hope the Queen gets her state pension. She certainly deserves one, considering how much shit she gets from the commies in our midst!

Actually isn't the Queen a Labour supporter? I always thought she was.

I do think it's ridiculous that she's allowed to keep Balmoral whereas most aristocrats have been ruined by death duties.

I'm not saying Balmoral and Sandringham should be taken away, just that 40% punishment duty should be paid generation to generation. Just like the rest of us too stupid to leave the country have to pay.

I can't wait till I'm rich. I'm getting the FUCK OUT of Britain I can tell ya!

I ain't paying 50% fucking income tax PLUS VAT ON ARTISTIC EARNINGS for no fucker!!

And I'm getting the FULL BENEFITS I'M ENTITLED TO. For once.

they never held back on taxing me. they'd put me in jail if i didn't pay.

To be honest I am not bothered by the monarchy. I am a republican by instinct but a powerless monarch will do.
As for taxes I don't fancy paying at the higher rate but if I earn enough then so be it....