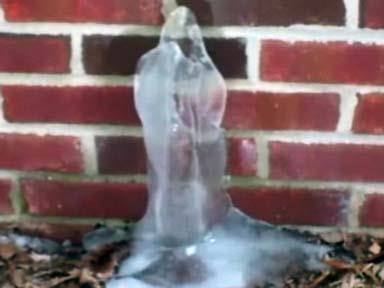 It's been a while since I had a simulacrum to post (so desperate was I for them that manipulated photos to create some of my own!). However we now have a good one to share.

Jennifer Bloomer of Dearborn Michigan claims to have seen an image of the Blessed Virgin Mary (BVM) in a chunk of ice outside of the office formed from the drips of a leaky tap.

"It was crazy," Bloomer said. "We were both like, I can't believe we're seeing this right now. It was really cool."

The ice chunk is being preserved in a freezer on the property.

BVM simulacra seem to be relatively commonplace - or at least not unusual.

Two years ago in February she appeared outside a mobile home in Plymouth, Indiana. The ice formation was discovered at the base of the hitch, frozen to the structure. It gave the appearance of the Virgin Mary with her head bowed and her hands at her chest, clasped in a prayer.

In January 2007, a Morton, Texas, grocery store reported a Virgin Mary ice formation inside its freezer. An employee noticed that water dripping from the ceiling had created the image, and soon believers flocked to the freezer to see it for themselves.

Another recent sighting had nothing to do with ice but did manage to find its way into a refrigerator. Two months ago a California woman said her candle wax had melted in the shape of Mary kneeling and praying. In order to prevent melting and preserve the likeness, she placed it in the fridge.

Well there you have it. Perhaps Dearborn will supplant Lourdes as a pilgrimage site
Posted by jams o donnell at 11:57 am

It's high time Jesus cut his mother's travel allowance. Or found some homest work for her. The woman has far too much free time on her hands, in my opinion; boogying around the world, doing guest appearances and now leaving narcissistic second-rate attempts at art all over the place.

Maybe he should buy her an i-phone or an X-Box or something...

Perhaps it's time for Mary to update and get an i-phone app for her appearances!

Something like Fatima and Lourdes could never happen today with such magnitude. Today, people give their massive devotions to Elvis, Marilyn Monroe, and other entertaining legends. I'm sure Mary, in Heaven, is enjoying the rest.

Perhaps all these BVM appearances are actually Elvis gallivanting around the world?

In any case, this one looks to me more like a monk holding a sheet or something.

Elvis styas pretty busy even in his 70s doesn't he Snoopy!