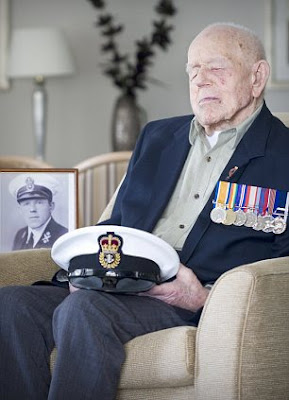 Claude Choules,110, has died has died at a nursing home in Perth, Western Australia. He was the last known
combat veteran of WWI

Choules was born on 3 March, 1901, in Pershore, Worcestershire, He joined the Royal Navy at the age of 14 . In 1917, he joined the battleship HMS Revenge, from which he watched the 1918 surrender of the German high seas fleet, the main battle fleet of the German navy during the war. He also witnessed the scuttling of the fleet at Scapa Flow the following year.

He remained in the Royal Navy after the end of WWI. In 1926, he went to Australia on loan as an instructor at Flinders Naval Depot. He subseequently transferred permanently to the Royal Australian Navy. During WWII Choules was the Acting Torpedo Officer of HMAS Fremantle. He was also the Chief Demolition Officer on the western side of the Australian continent. He was tasked with sabotaging Fremantle harbours and related oil storage tanks in the event of a Japanese invasion. Choules was also responsible for dealing with the first German mine to wash up on Australian soil during the war.

He remained in the RAN after WWII transferring to the Naval Dockyard Police (NDP) to allow him to remain in service until he was 55.

Coules was married to his wife Ethel for 80 years, until her death aged 98. He had 3 children, 11 grandchildren and 22 great-grandchildren.

With his passing the only WWI veteran remaining is Florence Green who served as a waitress at an RAF station in 1918. It cannot be long until she will have passed too. I understand that there are a few people who claim to have served in WWI but whose record is unverified. It may. Just, just be possible that there are one or two more veterans out there. If there are I will be posting here.

In the meantime rest in peace Mr Choules. The world is poorer for your passing.

I may have posted this here before, jams - whenever I hear of WWI veterans I just have to think of this song

May he rest in peace SH

A poignant song Francis. One that every jingoist should be made to hear over and over again

Thanks CLaude. His passing marks a step closer to the passing of WWI into history

Oh, I don't think I would like to live that long.

It's incredible that nearly a century later there was still someone living who fought in WWI.