The Queen in Ireland

So Ireland gets a visit from our head of state for the first time in 100 years (the visits to Northern Ireland not counting of course).

Normally a royal bisit would be of minimal interest to me but the one to Ireland is pretty symbolic. Anyway she is there, and a state visit to Ireland by the British head of state is long overdue.

But it is not the actual royal visit itself that has caught my eye but an image and an article: 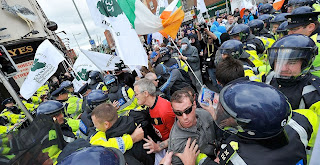 The above photo comes from Broadsheet.ie. Clearly there is one person who does not see the irony of turning up to an anti-British protest in a Manchester United shirt (or should it be stupidity or imbecility? whatever the mot juste someone has made themselves a laughing stock!). Of even greater amusement is the sight of a protestor carrying a packet of hams slices. Then again even diehard bitter-ender republicans get a bit peckish too.

The article in question is called "The Queen in Ireland: Our Mutual Catharsis" and appeared in the Guardian Comment is Free section. Written by the founding editor of Slugger O'Toole it is a worthwhile read(far more so than the majority of CiF articles).

I mean no actual disrespect to the author itself but am I the only person to see something just a bit amusing about an article about the Queen in Ireland written by someone called MICK FEALTY.

I'll get my coat!

An historic event in all sorts of ways - yet for me, who left Ireland in the mid 80s, the whole thing is overshadowed by the death of Garret FitzGerald, probably the greatest irish statesman since independence.

He was one of Ireland's best leaders, I would prhaps go for Lemass as the greatest but Fitzgerald is not far behind

HM went down a real treat out there. Apparently. Didn't she!!

PS Don't you think she looks really royal in all that news footage?

The trip has bee a resounding success Gledwood. A few idiots aside she seems to have gone down very well

He he. Maybe the ham was meant for the Queen?

Could be, could be!