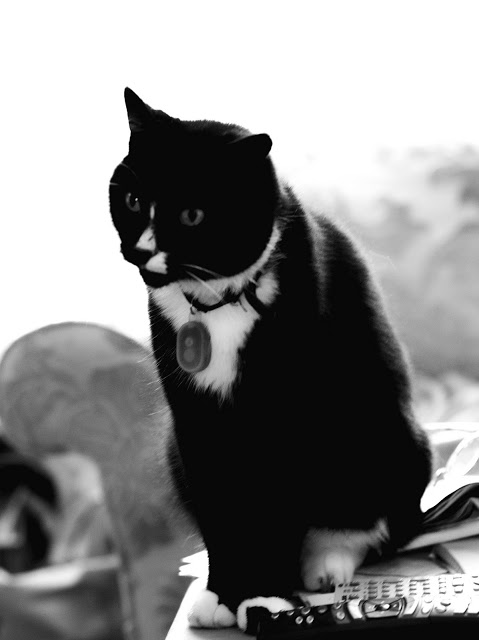 Shirlcy came downstairs a few minutes ago to find that Ted had passed away.

He did his best to fight the inevitable but clearly he was just too ill to go on.Still he had a happy life and he gave us so much love

It was in September 1998 when a funny looking littlekitten came into out home. He had been found on the streets of Dagenham. Cheeky and noisy fro teh start he became a local character. The local children used to like to play with him and he would happily scrounge food off the neighbours.

He had his down side.He would bully Bebe but she got her own back by stopping him from getting in by blocking the cat flap.

We Thought Robyn would be the next to go but it was not to be.

We had 14 great years with Ted. He gave us so much. We already miss him dearly
Posted by jams o donnell at 6:14 am

Email ThisBlogThis!Share to TwitterShare to FacebookShare to Pinterest
Labels: Ted

I'm so sorry, Shaun.
It's not easy losing a member of your family.
My thoughts are with you and Shirley.
Sending thoughts of love and peace.

Sorry to hear that Ted has passed away. I bet it was 14 very happy years that he wouldn't have swapped for anything.

Thanks Chris. The other cats seem to e acting strange today.

I never got to meet Ted in person, but I am deeply moved by this news. You and Shirley have lost a member of your family, and my heart goes out to you both.

Deeply moved. Dear Ted... He was such a colourful character, a real trooper. He will be missed by all of you at home, and by all of us in the cyber world. RIP, little fellow!

A thanks Claude he was a character and no doubt!

There's a dark cloud over me this morning. Ted left you both too soon. I will miss that dark warrior!

Thinking of you both.

Ted was my favorite character in the household. To the best of my knowledge no photos of Ted exist with another life form in the photo.

Ted was always stylish and funny.

Is it a safe bet that if you are going to add another cat it will not be Satan cat.

My condolences to you and Shirley, Jams. Ted was one of the great characters of the Internet, and I will miss him, having met him only through photographs. I was sure that he would trick Death at the last minute.

Andrew MacLaren-Scott said...
This comment has been removed by the author.
2:34 pm

Ah thanks. We hoped he might pull a recovery off but it wasn't to be.

We won't replace Ted Bek.We decided to have a complement of three cats rather than four.We expected it to be Robyn to go.

That's a shame. At least he had a good life.

He did have good one SH

I am sorry to hear that.

*hugs* to you and Shirley.

Oh heck. So sorry to hear. I know it can hurt like hell. After our cats died in 2010, I have decided not to take in any new ones. And I still catch myself looking for the big one from time to time.

Ah thanks Snoopy. Ted's death has hit me harder than I thought.

I'm very sorry to read the news that Ted has died. It's a sad event to lose a close family member of any species.

It is always sad to see a cat of Ted's strength of personality depart our world for the other side, and especially for you and Shirley, who lived with him so long. My deepest condolences, jams.

It's been a sad loss Susan.He was a one-off.

Thanks Steve. There won't be another cat like Ted