Crab Spider III - the Spider, the Fly, his Flower and her Pollen 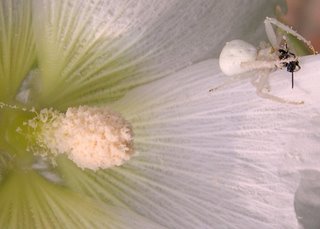 Spiders scare the crap out of me more than anything else.

The spider, the fly, his flower and her pollen, has all the makings of a really good drama. The struggle of life and death, pollination/sexual overtones, and intrigue, set against an exotic backdrop. Sweet.

Dave I would say the spider wouldn't harm a fly but I would be lying as you could see! Actually is is less than half an inch big and it isn't venomous (not to us anyway.

I think I'll pass on the Roaches! As for the name it is a take on the film the Cook, the Thief, his Wife and her Lover. I love the film but it is far from wholesome family entertainment! On the other hand there could be some great charchters, the mysterious leaf cutter bees, the even more elusive mason bees, the cock chafers (a real name), the gentle ladybirds and a cast of idle kitties! Add to that a whole range of plants that dress live brazen hussies!

Yup. I knew where the title was derived from although I've never seen the film.

Thanks to two weeks of rain and oppressive, humidity my yard is more akin to a Cheech and Chong flick. Featuring a superb cast of mushroom characters, and lots of grass. Add to that some giant "roaches", and voila!

Don't let it go Up in Smoke!