The new installation on Trafalgar Square's fourth plinth was unveiled during the week. Created by German artist Thomas Schütte Model for a Hotel 2007 is an architectural model of a twenty-one storey building, constructed in specially engineered red, yellow and blue glass and weighing over 8 tonnes.

Thomas Schütte said: 'I was really pleased to win the Fourth Plinth Commission. Developing a sculpture for such a well-known iconic place in London has been a thought-provoking creative challenge. This year I have had two shows in the UK and now to have this ambitious new project realised is very rewarding.'

Mayor of London Ken Livingstone said: 'London is known around the world for its historic buildings, but also increasingly for its groundbreaking modern architecture and this new work encapsulates this mix. Thomas Schütte's sculpture is very different from the previous work on the Fourth Plinth - the use of colour will provide a striking contrast to its surroundings and I am certain that Model for a Hotel 2007 will generate a huge amount of discussion.' 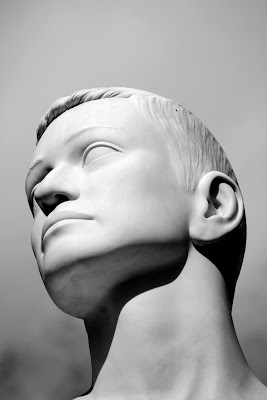 Personally I am not that impressed by it. I much preferred its predecessor, the statue of a pregnant Alison Lapper.
Posted by jams o donnell at 6:16 pm

A pile of crap

I liked the Lapper statue myself. but the new one is pretty unimpressive.