A small piece of family history for Remembrance Sunday 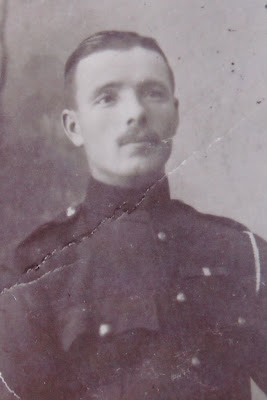 My Grandfather was a regular soldier who went to Flanders with the 2nd Battalion of the Munster Fusiliers in August 1914. He was one of a few hundred Munsters (plus a small number of cavalry and artillery mend) who fought a desperate rearguard action at the village of Etreux on 25 August 1914. The actions of this brave band ensured that the safety of the British Expeditionary Force in its retreat from Mons to the Marne. My grandfather was fortunate enough to be taken prisoner. Like other Irish POWs he was held at a camp in Limburg near the Dutch border. It is almost certain he was addressed by Sir Roger Casement who, before his ill fated attempt to ship German arms to Ireland in 1916 (and for which he was hanged), attempted to raise a brigade of Irishmen to fight on the German side. a grand total of 55 men volunteered for this brigade. My grandfather was not one of them. He spent the latter part of the war working as a labourer on a nearby farm. I understand he remained in contact with the family until his death in August 1927.

This list of men taken prisoner at Etreux was printed in the Times in 1915. My grandfather's name is among them. He was very fortunate to have been taken prisoner. It is very likely he would have been killed during one of its subsequent engagements: the 2nd Battalion was wiped out several times over during the course of WWI

When I read Flanders, August 1914, I thought 'Cripes!' And you explained how a regular survived - very much the 'luck of the Irish'.
My father spent the First War in Basra and then Rawalpindi in the RAMC. He too was lucky in that he had terrible feet. He volunteered before he was in danger of a white feather and ended up serving and extra year before repatriation.
A

I have a German friend who at age 17, on his first day in combat in World War II, was taken prisoner and spent the remainder of the war in the USA on a farm.
Good series of posts for the day Jams. I'm glad your father and grandfather did their duty and survived.

He was a very lucky man too

He certainly had that Irish luck on his side Aileni! Your father was fortunate not to have been in the very worst of it but I am sure he would have seen some terrible sights in Basra.

He was so fortunate jmb to have been taken prisoner and ending up a POW in the USA. I'm glad you liked the posts.

A very interesting piece of family history, jams. Yes, he was fortunate to have been taken prisoner and how nice that he kept in touch with the German family.

Thanks welshcakes. It was a nice gesture that they remained in contact. My dad was a toddler when he died so he never knew him. Sadly most of our information about him was lost so I had to piece together where he served and where he was captured.

We arrived late to the fight, but our WWI vets saw enough to know that luck was needed to survive the machine guns, artillery, and even the early aircraft and tanks in the trenches at the front.

One great uncle was gassed and died early as a result, but made it back to the US.

Even reading about it is scary if you have ever been in war and understand what was going on, it was homicidal madness around, and anyone who came out alive was lucky indeed.

Thanks Bryan. The US contribution may have been relatively short Bryan but thousands of young doughboys made the ultimate sacrifice.

Obviously I have never seen combat. I find it almost impossible to comprehend how one survived such conflicts and survived with one's sanity

Wonderful stories and great that you know them. So many of us leave it until too late to talk to survivors about their reality.

Your grandfather was still young when he died.

I wish I knew more about my grandfather Liz. Sadly he died too young. My paternal grandmother and the one unle who could have said much about him died before I was born too. I had to piece together info from what little we knew and form a bit of research.