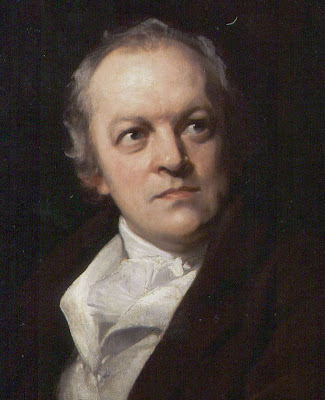 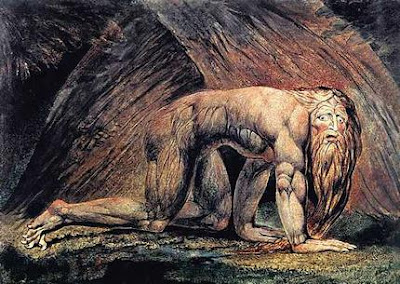 The Soul of Man Under Capitalism has an excellent post on Blake as prophet of Freedom. His post is far better than anything I would have written. 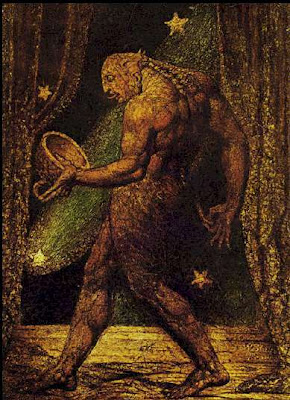 Here's a Blake Poem for your enjoyment.

"I die, I die!" the Mother said,
"My children die for lack of bread.
What more has the merciless Tyrant said?"
The Monk sat down on the stony bed.

The blood red ran from the Grey Monk's side,
His hands and feet were wounded wide,
His body bent, his arms and knees
Like to the roots of ancient trees.

His eye was dry; no tear could flow:
A hollow groan first spoke his woe.
He trembled and shudder'd upon the bed;
At length with a feeble cry he said:

"When God commanded this hand to write
In the studious hours of deep midnight,
He told me the writing I wrote should prove
The bane of all that on Earth I lov'd.

My Brother starv'd between two walls,
His Children's cry my soul appalls;
I mock'd at the rack and griding chain,
My bent body mocks their torturing pain.

Thy father drew his sword in the North,
With his thousands strong he marched forth;
Thy Brother has arm'd himself in steel
To avenge the wrongs thy Children feel.

But vain the Sword and vain the Bow,
They never can work War's overthrow.
The Hermit's prayer and the Widow's tear
Alone can free the World from fear.

For a Tear is an intellectual thing,
And a Sigh is the sword of an Angel King,
And the bitter groan of the Martyr's woe
Is an arrow from the Almighty's bow.

The hand of Vengeance found the bed
To which the Purple Tyrant fled;
The iron hand crush'd the Tyrant's head
And became a Tyrant in his stead."

Those are great drawings, but I feel a little stupid for not knowing who Wiliam Blake is... 8-)

He was a Master, Blake.

Though the Zoas always had a little mystified.

Frigga he is well worth checking out for his art and his poetry.

Absolutely Crushed, the Four Zoas is a head scratcher.

I think I like his art better than poetry, but happy 250th William!

Shame he's not around to see it!

I have never heard of him - the poem sounds interesting and his art.

250 years? Has it been that long? It seems like just yesterday we were sitting around having a beer.

baby amore he is well worth seeking out. Like Alison I go more for his art than his poetry but both are wonderful.