A bizarre disaster in Boston 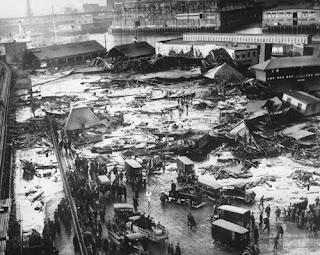 There is a folk belief in Boston that on a summer day in some of the older neighbourhoods a faint, sweet smell wafts up from cracks in the pavement. This is said to be the smell of ancient molasses....

The folk belief may be untrue but 89 years ago today there was a strange disaster in Boston . On 15 January 15, 1919, an unseasonably warm winter day (the temperature was above freezing) a giant tank full of molasses ruptured emptying its entire contents in the space of a few seconds. The result was nothing less a flash flood along Commercial Street consisting of millions of gallons of sweet but deadly goo.

The Boston Evening Globe published a description based on eyewitness accounts later that day:

Fragments of the great tank were thrown into the air, buildings in the neighborhood began to crumple up as though the underpinnings had been pulled away from under them, and scores of people in the various buildings were buried in the ruins, some dead and others badly injured.

The explosion came without the slightest warning. The workmen were at their noontime meal, some eating in the building or just outside, and many of the men in the Department of Public Works Buildings and stables, which are close by, and where many were injured badly, were away at lunch.

Once the low, rumbling sound was heard no one had a chance to escape. The buildings seemed to cringe up as though they were made of pasteboard.

A "wall of molasses" at least eight feet high rushed through the streets at a speed of 35 miles per hour. It demolished entire buildings, upended vehicles and buried horses. People tried to outrun the torrent, but were overtaken and either hurled against solid objects or drowned where they fell. More than 150 people were injured. 21 were killed.

The clean-up took weeks. Once that was done, the filing of lawsuits began. More than a hundred plaintiffs lined up to seek damages from the tank’s owner, the United States Industrial Alcohol Company. Hearings went on for six years. Several "expert witnesses" for the defence tried to argue that the explosion had been the result of sabotage, rather than negligence on the part of the company. In the end the court found that the tank had been overfilled and inadequately reinforced. No evidence of sabotage was ever found. All told, the company was forced to pay out nearly a million dollars in damages — a bittersweet victory for survivors of one of the strangest disasters in American history.

I had never heard of this, and I wish I had when I lived near Boston! What an odd episode in the cities history.

It's definitely a strange episode. Sadly it was a tragic one too.

Drowning in molasses - now that's what I call "coming to a sticky end"!

Lol Roger I was waiting for that one!

I have heard about this. It is odd indeed.

It definitely is LB

Yes, I know of this one. Very interesting phenomenon indeed.

It's definitely a strange one.

My mom always told me that "I moved slower than molasses." I guess that was also true for the many molasses victims.

Jams, great story! The Boston story is good too - Death by molasses, not a bad way to go! Ha! :)

Kind of puts me off molasses. What a horrible and weird thing to happen.

That is truly one of the most bizarre things I have ever heard. How tragic.

Very weird, I'd never heard about that before!

How true EWBL. Aparently it went at 35MPH so there was no chance of getting out of its way.

Thanks everyone for your comments. It truly is one of the strangest disasters ever

Roland, it is mighty strange you didn't hear the story. I have been a total of a month in Boston on about 8 different occasions, and the story was stuffed down my throat at least 5 times. Or more.

They are kinda proud of it, I have to say.