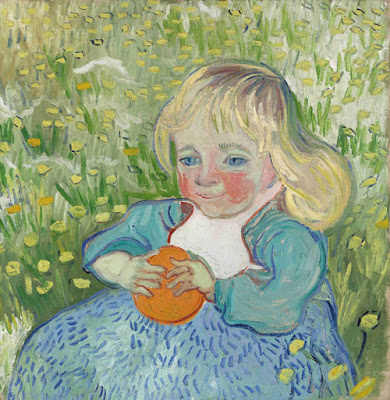 I’ve always thought of Vincent Van Gogh as a permanently troubled artist I had no idea that in the final weeks before committing suicidet he painted a set of child portraits that radiate the optimism and purity of youth. One of these works is to go on sale. L'Enfant à l'Orange (The Child with an Orange) will be offered at the European Fine Art Fair in Maastricht next month for £15.3m. It has been placed on the market by the Swiss couple, Arthur and Hedy Hahnloser, who bought it in 1916.

The portrait is of Raoul Levert, the baby son of a local carpenter, was painted at the end of June 1890 at the Auberge Ravoux in Auvers where he had been a lodger. It was during a brief period of contentment before depression and mental illness led him to shoot himself in the chest the following month.

Van Gogh had spent a year in a mental hospital before moving to Auvers in May 1890. He was apparently ecstatic at being in a new environment and in a space of just 70 days he painted more than 80 works. The portraits he worked on during these last weeks included several pictures of children.

Raoul Levert is shown wearing the traditional child's smock of the time in L'Enfant à l'Orange, with a broad smile in soft and vibrant colours. The identity of the child was confirmed by the late Adeline Ravoux, the daughter of the innkeeper, who was photographed standing next to Raoul outside the Auberge Ravoux in 1890.

What lovely rosy cheeks. Almost like the childs been drinking too much.

That is odd that he painted these right before his death. But, as an artist myself, I realize that what you create does not always represent your innermost feelings.

I thought that too Guru!

I don't doubt that LB. We all have masks anc we can dissociate our feeiling from extrernal activities.

Still it came as a surprise to see something so optimistic from him so soon before his suicide.

Interesting post, Jams.
Van Gogh did have a manic period in the hospital where he painted some beautiful stuff. Have you ever seen the movie 'Lust for Life', starring Kirk Douglas? It captures this period in his life well.
Van Gogh was one of the truly brilliant artists of all time. It's tragic he went to his death feeling as if no one understood him or his work. Gaugin once said to him: 'When I look at your work all I see is that you paint too fast'. To which Van Gogh replied: "Maybe you look to fast."

I had no idea these paintings existed either, jams, and thanks for the background information.

Your post reminds me of a 'letter to Vincent' I wrote 18 years ago when van Gogh's 'Portrait of Dr. Gachet' fetched an astronomic price. Perhaps I'll have a look into my archive, and translate it into English and post it. :)
I agree with L.B., adding nobody will ever know except of the artist himself, and even he would sometimes be surprised by his 'doing'. :)

I must have seen it r. The Rijksmuseum Van Gogh in Amsterdam is a wonderful gallery. Truly a tribute to a great artist. I love his riposte to Gaugin!

Glad you found it interesting welshcakes

That is beautiful. Somehow I never knew about these happy paintings. My education has terrible gaps.

Glad you enjoyed the painting dragonstar